Question: If it wasn’t for the occasional outsized loss, I would be in much better shape on most days. Do you think that knowing when to just take your loss immediately is one of the things that separates a success from failure?
Video duration: 2min 48sec 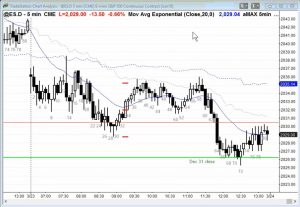 Yeah, I think everyone — soon after they start to trade — discovers that they make a lot of winning trades, and if they add up the dollars from their winning trades alone, they start to say, “Huh, I can make a living doing this.”  And I think the most important transition that a trader has to make to become profitable is to get rid of the losers.  Everybody takes enough winning trades.  Some of the winning trades are just stupid and you just were lucky and won on a dumb trade.  A lot of them you took because they made good sense and you managed them well, and the reason why you’re not profitable is because you made mistakes.  In the new course I have a couple of videos about how to manage losing trades, and I talk a lot about this.  But you know, I think it’s really important, first of all, to take trades that make sense, trades where you have a mathematical edge; in other words, when you see this [B74 TTR], don’t trade.

Think trades through before taking

The biggest mistake I think traders make is they take bad trades.  They don’t think them through.  Is their goal swing?  Is it scalp?  Is the setup conducive to their goal?  Are they putting stops in that are appropriate for their goal?  Is their target appropriate for their goal?  So that stuff is all pretty objective, and it’s pretty easy to get beyond that, and then you have to get to the point where you know how to manage bad trades.  There are always going to be bad trades, so this is buy the close [B34], buy the close [B35], buy the close [B36].  What do you do with this [B51]?  Well, stop is still below here [B29] so if you don’t get out — let’s say if you don’t get out below the double top and your stop is still down here, you buy more here [above B51], and you get out breakeven back at that close [B36/55], right?

Be objective – use right stop

So one of the important things is not panicking and being objective, just trying to make sure that even though the market’s going against you, if it’s still consistent with your premise, use the right stop.  One of the things that a lot of traders do is they see the market as consistent with their premise, yet they don’t want to risk all the way down to their stop, so then they end up putting a stupid stop in — what I call “skunk stops,” somewhere in the middle.  So instead of getting out early below 46, right, the bulls don’t want to put a stop down here [below B29], they’ll put a stop here [below B42] even though it will probably be bought if it falls below 44.  So to me, that’s a mistake. And that’s a costly mistake.  You give back a couple points here, a couple points there, three points — it doesn’t take too many of those to create such a big hurdle that you end up being negative. So I think it’s important to try to get rid of as many mistakes as you can.