Days like this really destroy the progress I’ve built up for weeks. I usually sit aside. I tried today and got tricked into going with breakouts that looked strong. Can you talk briefly again about tips to not get into these awful trading range breakout attempts?
Audio duration: 3min 54secs 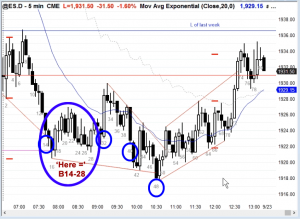 Get in early—scalp out part

So once you know the odds are, either on bar 1 or bar 27, it doesn’t matter. Once you know the odds are that the day’s going to have a lot of trading range price action, for me what I do is I stop looking for swings or maybe swing a small part and switch to scalping every trade or the majority of my position on any trade And if the market continues to breakout and it enters a swing phase, I’m fine—I’ll look to put positions back on. But when I think the day—no matter how strong the breakout attempts are up and down, if I think the day is probably going to have a lot of trading range price action, I resist the temptation to swing, and I never buy high, and I never sell low. If anything, I’m looking for strong bull breakouts to fail and I’m looking for strong bear breakouts to fail as well. So a lot of times I’ll buy—I’m pretty sure I was long on 32, but I get out pretty quickly when it doesn’t continue up, and I do that all day long. I try to enter early enough so I can scalp out part, but if the breakout bar does not give me immediate follow through, I quickly exit.

There’s a natural tendency for people to be hopeful. I think it’s a survival trait. You always have to be hopeful. You don’t want to be wandering through the desert and then give up, and then have your body be found 200 yards from an oasis. It’s a trait that I think was just developed in our evolution. Being hopeful is a survival skill—it keeps us going during difficult times. You’re trying to feed your family. You don’t give up at 3 o’clock saying, “Err… I’ve hunted all day, didn’t get anything.” No, you keep hunting until you get something. You know, you keep hoping that there will be something there. And that works against you as a trader. You’re constantly hoping that the day will turn into a swing day because it’s easier to trade, but until it does, every attempt to turn into a swing trade will be a trap.

So it just takes a long time. For me, it’s kind of depressing. I dealt with it decades ago, but it was really kind of depressing because it just didn’t seem right. The market is trying to go up; it should keep going up instead of reversing abruptly. And if it’s going down, it should keep going down. But instead, it seems to just reverse abruptly And it just kind of offended my sense of how the world operates—and it’s upsetting. But now, I see it every day. On a day like this, you see it a lot. I’m at the point where, to me, I just look at it and say, “Yeah, it makes sense,” right? Everyone wants the swing, and the market’s telling us it’s not going to swing, and therefore every attempt to swing is probably going to reverse pretty quickly because all the hopeful traders will be trapped and they’ll have to get out pretty quickly.