Question: How do you determine the probabilities that are in your books, your trading manual, and that you speak of daily? For example, the probability of 10 bars 2 legs after a wedge. Or if the first five days are negative: January is down 60 percent of the time instead of only 30 percent of the time. Do you have a software package that helps determine these from historical data?
Video duration: 5min 27sec 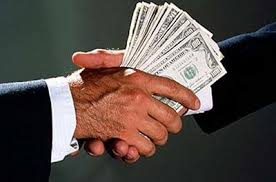 No, but you’re bringing up two different things. Ok, let me deal with the second one first, the business about if the first five days of January are negative, January’s down 60 percent of the time instead of only 35 percent of the time — all traders know that, right? So those calendar things that I talk about, like 4th of July being up and Christmas being up, and then certain months being up, those are things that I just picked up over the years from what I think are reliable sources.  I never make trades based upon them, but it’s kind of like if you’re in a fraternity or sorority and you have a secret handshake, kind of like “Welcome to the club.  You’re now a trader,” and those are some of the secret handshakes that traders have.  They know stuff like that.

If you have a really big bull trend for two, three, four days, you expect the market to trade down for a day and a half.  There are a whole bunch of little things like that, that traders know.  It’s just fun.  To me, it’s just fun and stuff like that.

How do we determine probabilities

Now, the first half of your question — how do you determine the probability of things like 10 bars 2 legs after a wedge — that is much more subjective.  And also, I talk about any time you’re in a channel — anytime you’re in a channel and you break to the downside, you have a 30 percent chance of the breakout being successful, a 70 percent chance of it reversing within a few bars and going up to the top of the channel.  And do I know it’s 70 percent?  No.  Have I tested it?  No.  It’s just my guideline.  I’m drawing a contrast between that and 60 percent.  If I say most anything’s about 40 to 60 percent; strong breakouts, probably somewhere around 80 percent that there will be follow-through.  But I’m trying to say that we have a reasonable looking wedge or if you have a reasonable looking channel, especially one continuing within parallel lines, the reality is more than 60 percent of the breakout attempts will fail and the market will reverse. 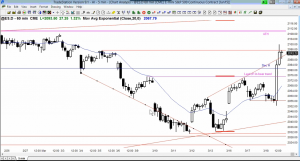 I talked about that on the 60-minute chart over here.  I said that this is a bear channel; you can call it a wedge; doesn’t matter what you call it.  Ok. But to me, this looks fairly “wedgie” in an oversold market, right? In a bear breakout below the bottom of a channel — 70 percent chance it’s going to reverse instead of breaking out to the downside and starting a new leg down.  Normally, it reverses within one, two, three, four, five bars.  Here, it took about 10 bars before it reversed, but unless the bears get that strong downside breakout, I’m going to assume the breakout will fail.  Then you also hear me talk about microchannels, if you start to get 10 bars in a row, like on the 60-minute chart, in a microchannel.  Like here, the first breakout will be sold, but the second one will be bought, right?  So I have statistical stuff just from my own experience.  And then here, once you start to get whatever it was, 11 bars without a pullback, 60-minute chart, the odds are high that the first reversal down will be bought, but that you’ll soon enter a trading range. 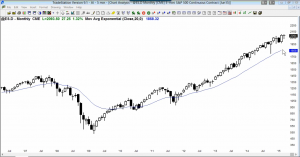 On my monthly blog, I keep talking about this monthly chart.  We have 33 months without touching the moving average.  That’s only happened twice before in the past 50 years.  How do I know that?  I put up the cash chart and scrolled back and counted how many times the market has been 31 bars away from the moving average, and it only happened twice before.  Both times, the market continued away from the moving average with more bars; one time, I think 36 bars; the other time 44 bars.  However, both times resulted in corrections.  One time, I think 20 or 22 percent, and the other time 37 percent.

So some of it is how many months away from the moving average for the monthly chart.  Other things, they’re just stuff that I’ve picked up over the years that I’ve heard people on television say that I’ve trusted. They’ve tested it; some of it I’ve tested myself to determine that it was factual.  You can do testing with TradeStation and other software products as well.  And then some of it is purely subjective.  Pick a number — 80 percent of breakouts fail and 80 percent of trend reversals fail, and that is subjective because what is a breakout?  What is a trend reversal?  And that is all subjective.  But in general, the point that I’m trying to make is if you’re in a trading range, you should not be buying highs, you should not be selling lows, because chances are you’ll lose money.