What kind of drawdowns should a trader expect at different stages of their development?

Trading drawdowns — Your risk on any one trade 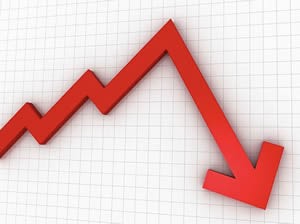 Well, obviously that’s very open-ended and there’s so many variables, right? In general, a trader should try to risk no more than 1 or 2 percent of his account on any one trade. And when you first start out, you’re going to be losing all the time because you’re going to be making all the mistakes that everyone in the history of trading makes for the first several years when they start out. After they make the same mistake 20 times, they start making it less, and then they concentrate on all the other mistakes, and eventually you get through all the mistakes and you figure them all out, and all of a sudden you start discovering that you’re not getting the drawdowns anymore.

But it’s fairly common for a trader to blow an account, even a really good trader. Richard Dennis back in the ‘80s — I don’t know if you’ve ever heard of The Turtles. Linda Raschke, she made a career of saying she was one of Richard Dennis’s Turtles. It was kind of a Pygmalion story. Richard Dennis had the belief that anyone could be turned into a trader, and he took a group of people and turned them into traders. So you always hear the argument that do you have to be born a trader or can you learn how to be a trader? It’s not like being a center in the NBA where you have to be born 7-feet-tall. That’s not what it is with a trader. I don’t believe you have to be born a trader. I think you can learn how to trade. I think you can learn how to do eye surgery. I did, right? You can learn law. You can learn any skill, and I think trading is no different from any other career, and you can learn it. It’s not like you need some special physical, intellectual ability to become a good trader. You do not have to be 6-foot-6 and 300 pounds, like an offensive lineman in the NFL. You do not have to be 7-feet-tall, like a center in the NBA. You just have to love what you’re doing, and you have to apply yourself, and focus really hard on getting rid of the problems. You just have to focus really hard on being objective and trying to do the right thing, just consistently doing the right thing. 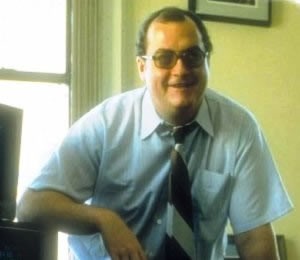 But let me go back to Richard Dennis. He was a pretty famous fund manager back in the ‘80s and he had, I don’t know, $100 million, $200 million dollars under management. And twice, I believe — I could be wrong on this, but I believe twice in his career he blew his account. In other words, twice he lost so much of his clients’ money that he had to close his fund. And when you hear about somebody blowing an account — let’s say an individual trader — let’s say you have a $5,000 account. Blowing your account, if you get down to zero, you blow your account. But you can blow your account and have more than zero. To me, a blown account is the account has dropped to a level where there’s not enough margin left to trade the style that you want to trade. So let’s say you trade two contracts and your account level drops to $3,000, and the margin is $2,000 per contract. To me, you have blown your account. You cannot trade the way you want to trade without putting more money in your account.

I’ve never blown an account, but I had the good fortune of making a lot of money as an eye surgeon, so I always had enough money in my accounts. However, I lost for 10 years; I just kept losing, losing, losing, doing the same stupid things over and over again. Every now and then, I’d feel like I’d rid myself of one type of trading mistake and then I’d discover some new one and I’d try that one for several months And then when I got bored with that I’d go back to the old one that I missed because I hadn’t used it for several months. So I’m being facetious, right? But the point is that it just takes a long time to stop making the mistakes and to get really serious.

I think a lot of traders, when they start out, believe that they want to be a trader, but they don’t believe it’s possible, so something inside of them makes them feel like “I’m not good enough. I really don’t have the skills necessary to be successful at this. I don’t have the advantages that other traders had. Somebody went to Harvard, and then they worked at Goldman Sachs, and they have this team of software writers around them, and they have all these support people all day long cheering them on and giving them advice, and they have a big advantage.” That’s nonsense. That is all part of the search for the false god, and when traders start out, that is a common thing. We all want to believe in something and we always want a parent figure to take care of us. And I think one of the biggest difficulties traders have starting out is they believe they cannot do it on their own. They cannot do it unless there’s somebody there holding their hand and preventing them from doing something terrible — committing trading suicide, blowing an account And it takes a long time to get past that, but I think anybody can get past that. And again, I think you’re not born a trader. If you love what you’re doing, and you have the determination, and you really make up your mind that you’re going to stop making mistakes, I think it’s doable.

And back to your question, what kind of drawdowns a trader can expect, it all depends. There’s so many variables and a big one is how determined are you to continue to do stupid things? How unwilling are you to give up doing stupid things and then moving on to being objective? And each of us is different. It took me a long time, and now I’m very good at it.

Now, I still do stupid things. Probably once or twice a day, I do something and say, “Al, why — why’d you do that? That was just stupid.” But when I do something stupid, I get out within seconds. As soon as I say, “Al, you’re an idiot,” — as soon as I say that, I get out. And I don’t sit there and say, “Oh, I’m going to try to trade my way out of this.” I say, “No, I bought, and the market is not a buy — I got to get out.” It’s very straightforward. I might give myself five seconds and try to use a limit order to get out, break-even, sometimes a one-tick profit, sometimes a two or three-tick loss. But if I decide to do something stupid, within 15 seconds I’m out, and I don’t care if I lose three ticks or five ticks. I don’t care. If I’m doing something stupid, that means I should be doing the opposite, probably going to do the opposite. 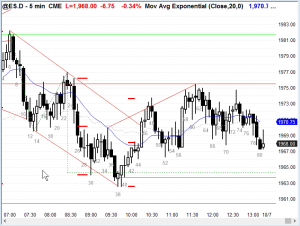 I think that is important for traders. They have to not be hopeful. They have to be objective. And if they conclude that they’ve done something stupid — well, they got to get out. And the other side of that is, if they decide that it’s stupid to not do something, they got to go do the something. Like Bar 10, it’s stupid not to be short. Bar 26, it’s stupid not to be short. Bar 57, when it closes, it’s stupid not to be long. So to me, that’s the other side of it. Just as its important to avoid stupid mistakes, doing stupid things — there are mistakes of omission as well. If you’re a trader and you decide, “Oh, Bar 10 — you see the close at 10, the close at 11? The market’s going down.” Well, if you say the market’s going down — sell. You know where the stop is — it’s above 9, it’s above 7. Take the trade. Put the stop there. Trade small enough so that you don’t get in trouble if your stop gets hit. But that’s what you got to do.