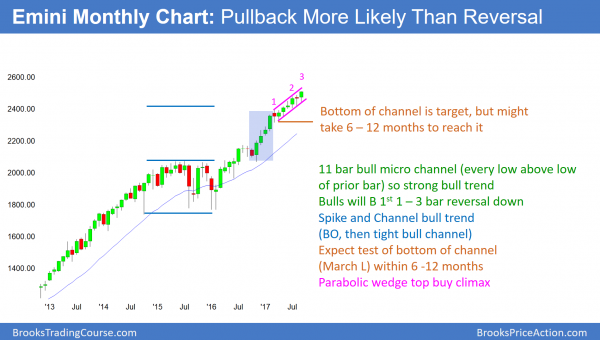 The monthly S&P500 Emini futures candlestick chart had a bull trend bar this month. However, it has had 11 months without a pullback. This bull micro channel is therefore unsustainable and climactic.

The protracted bull micro channel is extremely unusual and therefore climactic. I do not believe this has ever happened in the 18 years of the Emini. The longest micro channel in the S&P cash or futures markets in my 30 years of trading was in 1995. That was at the start of the strongest and longest bull trend in maybe 50 years. This is unlike the present rally, which is 8 years into a bull trend. It is therefore more likely climactic than the start of a new, stronger leg up.

Hence, there is a 70% chance of a pullback by the end of the year. Otherwise, the micro channel would become the longest in at least 30 years, which is unlikely. Since the recent bars are almost 100 points tall and a pullback means that a bar goes below the low of the prior bar, the minimum goal would be about 100 points. When a buy climax is this extreme, the pullback is often bigger. Consequently, it might last 2 – 3 months and fall as much as 200 points.

Because last month was a big bull bar in a buy climax, there is an increased chance of a reversal down this month. The most common reversals are bear reversal bars and 2 bar reversals. If either forms this month, it would be a sell signal bar for November.

A bear reversal bar rallies above last month’s high, but then closes below the midpoint, and usually near the low of the bar. A two bar reversal is a bear bar following a bull bar, like September. It might go a little above last month’s high, but it does not have to. It can also be a bear inside bar. For example, October could form one with September if it opens near the September high and reverses down from around that high. It could trade a little above the high, but not much. Then, October would trade down and close near its low, and that low would be around the September’s low.

Despite being a buy climax, a protracted micro channel is also a sign of strong bulls. As a result, the 1st reversal down will probably only a pullback on the monthly chart. It will probably last 1 – 3 months. At that point, the bulls will buy again for a test of the high. If that rally fails, the bears will have a micro double top. This would increase their chances of a trend reversal.

However, the bull trend has been very strong. Therefore, the bears will probably need a trading range lasting 10 or more bars to create enough selling pressure to make traders believe they might be able to begin a bear trend. Hence, the risk of a 20% or more correction is small over the next several months.

However, the bull climax could easily lead to a trading range that could last 6 – 12 months. Even if it did, the 11 month rally has been strong enough to make at least one more leg up likely before the bears have a reasonable chance of a 20% or more correction. 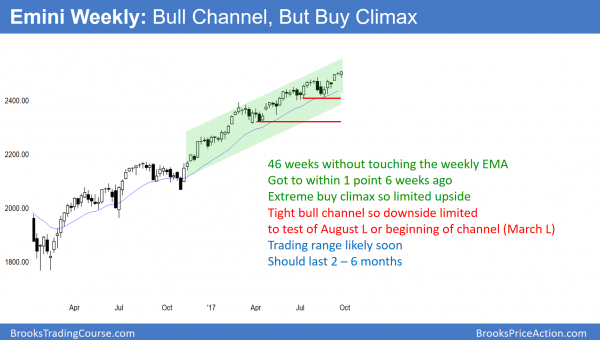 The weekly S&P500 Emini futures candlestick chart is in a buy climax. This week’s outside up bar will probably be part of a top and not the start of a new leg up.

The weekly S&P500 Emini futures candlestick chart had a doji bar 2 weeks ago after a breakout to a new high. This past week triggered a sell signal by trading below that doji bar’s low. However, the week then reversed up to a new high, negating the sell. Yet, that outside up bar is not as bullish as it might otherwise be because of the buy climax on the weekly and monthly charts.

The weekly chart has been above its 20 week exponential moving average for 46 weeks. While that is a sign of strong bulls, it is also a problem. This is because the longest the Emini has ever stayed above its average was 50 weeks. That was in 2003 and it led to a 10% correction and a 10 month trading range.

There have been many other times when the weekly Emini held above its average for 20 weeks. However, there has been no other time when it stayed above for anything close to these 2 examples. Since what is going on is rare, it is likely to not become more rare. Instead, it will probably do what it did after all of the other buy climaxes. What usually happens is a reversal lasting 10 or more bars and having 2 or more legs sideways to down.

While there is no top yet, the odds are that it will form soon. Furthermore, a 10 week selloff that falls below the average would be 2 – 3 months. This is therefore consistent with what is likely on the monthly chart. 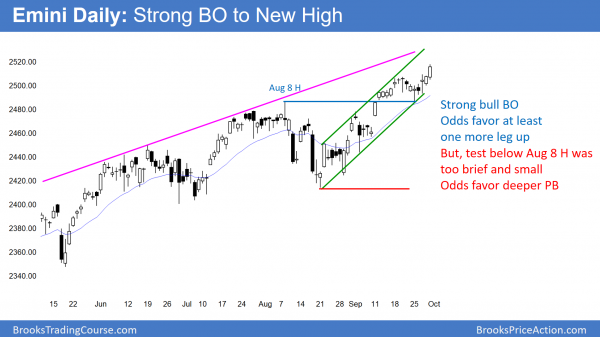 The daily S&P500 Emini futures candlestick chart had a bull inside bar on Thursday after another new high. It was a therefore a strong buy signal bar. Friday was a strong entry bar for the bulls. The odds therefore favor at least slightly higher prices next week.

This month-long rally is also the 5th leg up in the bull channel that began in March. That is climactic. Since a bull channel is a bear flag, there is a 75% chance of a break below the bull trend line and then a swing down. Furthermore, it will probably begin within a few weeks.

The daily S&P500 Emini futures candlestick chart has been in a broad bull channel since March. From the Market Cycle, traders know that channels usually lead to trading ranges. There is therefore only a 25% chance of a successful bull breakout above the channel. Furthermore, there is a 75% chance of a break below the bull channel and then an evolution into a trading range.

What happens once there is a trading range?

Once it is in a trading range, the bulls will try to create a buy setup that will lead to a resumption of the bull trend. However, they might not aggressively buy until the swing down tests the beginning of the bull channel. That March 27 low is about 200 points down, which would be close to a 10% correction.