Limit order bulls and bears made money in the 1st few bars. Furthermore, the gap above Friday’s high closed. In addition, the Emini is in the middle of its 4 week range. Hence, this is trading range price action. It therefore reduces the chances that today will be a strong trend day up or down. After 4 consecutive days with early highs, the odds are against that today. This is because the Emini is in a trading range and it usually only goes one way for a few days.

The bulls got a High 2 buy setup and a possible early low of the day. Yet, the prior bar had a big bear body. Furthermore, the Emini is far above the moving average. Hence, this is additional evidence of a likely trading range for the 1st 1 – 2 hours.

The Emini sold off last week after the Dow repeatedly failed to break above 20,000. Yet, 20,000 is still close enough to pull the Dow up. In addition, the bull trend on the weekly and monthly charts are strong. Therefore last week’s reversal down is more likely a pullback that will form a bull flag. Less likely, it is the start of a reversal down. Hence, the bears want a test the breakout point at the August high.

The odds are that the Dow will get above 20,000 this week. The Emini is up 14 points in the Globex market, and therefore the Dow might finally get about its Big Round Number today. In addition, the weekly chart is strongly bullish. Furthermore, the odds favor one more leg up.

If the bulls get their one more leg up, the bears would have a higher probability of a 5% or more correction. This is because a reversal from that 4th push up would create a Low 4 top. I wrote about this consecutive top pattern over the weekend.

The Emini will probably gap up today. Yet, it sold off early in each of the past 4 days. While the bears will try again today, the context is good for the bulls. The odds therefore favor higher prices. Since the bulls have a bull flag on the daily chart and a gap up is a bull breakout, they will buy an early selloff. Hence, if there is an early selloff, look for an Opening Reversal up from around the moving average and an early low of the day. Less likely, the bears will successfully create the 5th consecutive day with an early high.

While the Emini is still within its 4 week trading range, the odds still favor the bulls. In addition, there are seasonal forces operating in January (“The January Effect”). Both the bulls and bears want to make a statement at the start of the year, hoping to sway sentiment for the remainder of the year. Since these calendar tendencies are useless to traders (I will discuss them over the coming weekend), whatever happens is academic. In any case, it is always amusing to hear pundits talk about it every January. 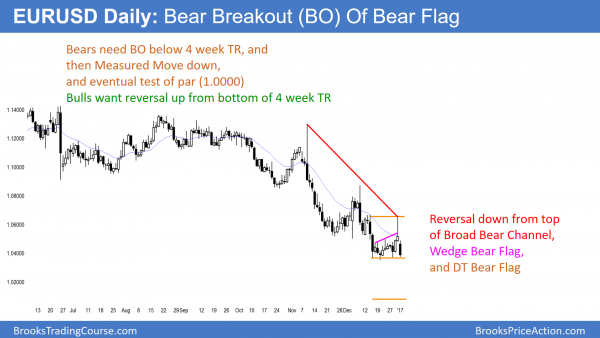 The EURUSD Daily chart sold off overnight from a lower high and double top at the top of the bear channel. In addition, it was also a breakout below a small wedge bear flag.

While the EURUSD 240 minute chart reversed up from a head and shoulders bottom, it sold off after reaching its measured move target. In addition, the selloff was at the resistance of the bear trend line and moving average. The rally was strong enough to stop the bears. Yet, it was not strong enough to start a bull trend. As a result, the 4 week trading range price action is still in effect.

While the EURUSD sold off strongly after midnight, it has been in a tight trading range for the past 3 hours. Since it has not broken below the 4 week low, the bulls are hoping that this is just another test. Hence, they want to reverse up and make the support stronger. Yet, the momentum down on the daily and weekly charts favor the bears. Furthermore, the EURUSD chart might be so close to par that it will have to get there.

Because of the 3 hour tight trading range at support, the odds favor mostly sideways trading today. This will probably limit the downside, even though the odds are that the breakout will be to the downside. In addition, because the rallies have been small, the lack of buying pressure will limit the upside until the bulls can begin to create some big bull bars. As a result, today will probably begin sideways, and bears will sell rallies. The bulls want more big bull bars and a broader range before they will buy. 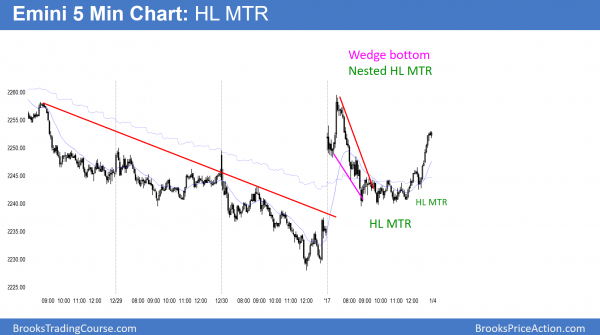 For the 5th consecutive day, the Emini sold off early. Yet, it also broke above a 4 day bear channel. Therefore, the selloff to the tight trading range created a higher low major trend reversal over the 4 days. There was a nested higher low reversal intraday today as well. The bulls need follow-through buying tomorrow to stop the 5 day slide.