While the Emini had a small gap up, it closed on the 1st bar. In addition, the 1st bar was a doji bar, which means that there is not yet much energy. Since the Emini is breaking above the top of a 5 day bull channel on the 15 minute chart, the odds are that the breakout will fail within about 5 bars. That means within an hour or so.

Because today traded above last month’s high is a monthly buy climax, traders need to be aware that the Emini might not get much higher and then trade below last month’s low. That would create an outside down bar and a 2 bar reversal. The bears need a reversal to begin a 1 – 3 month pullback, and they will try to get that. This means that they will try to get an early high today and a trend down.

The bulls want last month’s rally to continue. Yet, if they get a 20 – 30 point rally, it might reverse down to below today’s open by the end of the month and create a reversal bar on the monthly chart.

So far, today has had 2 small dojis in the 1st 3 bars. This reduces the odds of a strong trend day. In addition, it increases the chances that any trend day will either be weak or spend a lot of time going sideways, like Friday. If there is a strong series of trend bars up or down, then traders will look for a strong trend. Without that, traders will look for at least one reversal today. As I said, the Emini is deciding between a 2 bar reversal, a reversal bar, and a strong bull trend day on the monthly chart. This weak open increases the odds of an early high. However, the early small bars increase the odds of a mostly quiet day.

On Friday, the Emini broke above Thursday’s buy signal bar on the daily chart. It rallied to another all-time high on Friday. While there is no sign of a top, the 11 month bull micro channel on the monthly chart makes a pullback likely soon. Until there is a top, there is no top. Therefore the odds favor at least slightly higher prices.

Friday closed at its high in a strong rally on all higher time frames. This means the Monday might gap up on the daily, weekly, and monthly charts. When there is a gap up in a strong bull trend, the bulls will try to keep the gap open. Therefore, if there is a selloff, the bulls will buy just above last week’s high.

In addition, last week’s rally was strong. Consequently, the bulls might not give up even if there is a strong early selloff to below Friday’s high. This means that they might create an Opening Reversal up from even below last week’s high.

Whether or not there is a gap up, the bears will try to create a reversal this month. If they fail to get a reversal down on the open, they will try again on a rally above last month’s high. This is even true if the rally is extremely strong. That could result is a bear reversal bar on the monthly chart.

The monthly chart is in an extreme buy climax. This means that most traders are buying because the Emini is going up strongly, not because they think it is cheap. As a result, if it stops going up strongly, they will be quick to sell out to avoid a loss. This often results in a sharp reversal down from a buy climax. Yet, since the monthly chart is so strongly up, the odds favor a 1 – 3 month bull flag and not a bear trend.

The past week has had reasonable swings up and down. Even though Friday was mostly in a tight trading range, the odds favor at least one swing up or down today. In addition, a gap up would increase the odds of a swing up or down. If there is a gap up, it will probably be small. That means that there is not much energy. Consequently, the odds would be against a big trend day.

Even though the higher time frames are extremely strongly up, they are all in buy climaxes. This increases the chances of a big bear trend day at any time. Day traders should be prepared for a surprisingly big move up or down. However, since a big move would be a “surprise,” that means that today will probably be more of a hesitation day after last week and month’s big rallies, and not be very big. 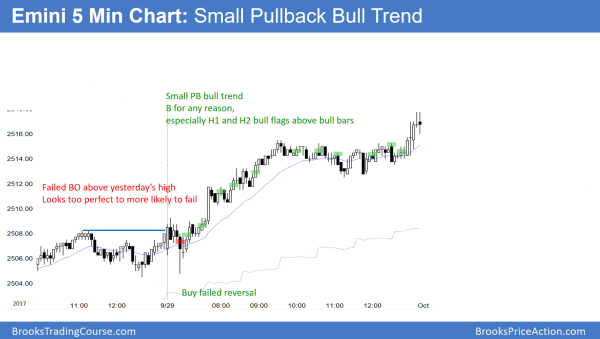 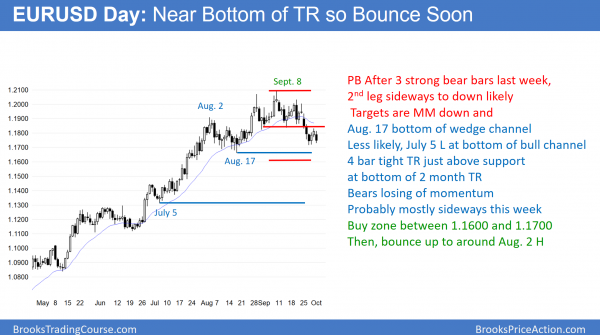 The EURUSD daily Forex chart is having a small 2nd leg sideways to down from last week’s 3 bear bar break below a head and shoulders top. After 2 bull bars, the bears are losing momentum at support a the bottom of a 2 month trading range.

The EURUSD daily Forex chart broke below the neck line of a small head and shoulders top last week. The 3 bear bars made at least a small 2nd leg sideways to down likely. The past 2 days met that minimum goal.The bulls hope that the selloff is simply a big 2 legged pullback from the September 8 high. In addition, they want a higher low above the August 17 major higher low.

However, the selloff was strong enough to make a trading range more likely than a bull flag. Since trading ranges typically disappoint bulls and bears, the odds favor sideways for at least a couple of weeks. Furthermore, the legs usually go beyond support and resistance. Therefore, the odds favor a break below the August 17 major higher low before much of a rally. That means that the buy zone is between 1.1600 and 1.1700.

In addition, that rally will probably go above the September 14 head and shoulders top breakout point before reversing down. It will likely go up to around the August 2 high, around 1.2000. That would therefore be the sell zone. If it turns down from around there, the pattern would become a bigger, nested head and shoulders top where the small September top is the head of the bigger pattern.

The 5 minute chart bounce up 30 pips from around last week’s low. The chart is in a 4 day tight trading range after last week’s bear breakout. When that happens, there is usually a 2nd leg up to the 20 day exponential moving average. It would probably test Friday’s high and 1.1850 in a 2 – 5 day rally. Then the bears would sell again. That would create a Low 2 bear flag.

Since the odds favor a break below the August 17 major higher low before a rally goes very far up, traders will sell rally. This would trigger the Low 2 bear flag. However, the daily chart is near support. Bulls will buy around and especially below the August 17 low.

The weekly and monthly charts are in strong bull trends. The odds are therefore against a trend reversal down without at least a small double top on the monthly chart. Consequently, while the odds favor slightly lower prices over the next few weeks, they then favor a 200 – 300 pip bull leg in the trading range. 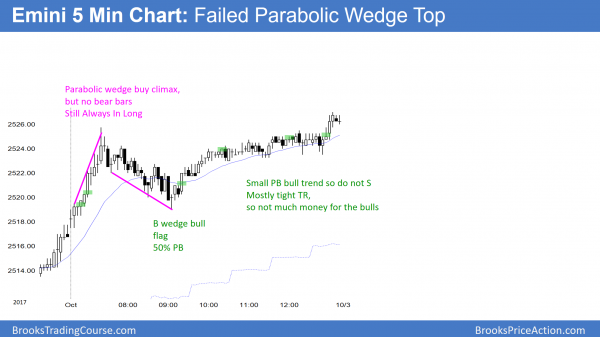 The Emini began with an 11 bar bull micro channel (no pullbacks), and it had no bear bars. That is strong buying and it made a bear trend unlikely. After a deep pullback, it rallied in a very weak small pullback bull trend.

While it is still possible for October to reverse down and trade below the September low, it is unlikely. That would be an outside down bar on the monthly chart and the 1st pullback in 12 months. However, because this is the 12th month without a pullback and that is very rare, the upside is probably limited to another 1 – 2 months before there is a 1 – 3 month pullback of 100 – 200 points. There is no top yet, and therefore the odds continue to favor at least slightly higher prices.