The Emini reversed up strongly from above yesterday’s low from a major trend reversal, but a trading range day is likely. It tested the close of yesterday and found profit takers. The rally was strong enough so that the open will probably remain the low of the next 2 or more hours and possibly of the day. Because a trading range day is likely, pullbacks can be deep. Traders will probably soon be scalping, buying low and selling high. At the moment, the Emini is always in long so it is better to focus more on buying pullbacks until strong selling pressure develops.

Since the range is so big, there might be swings down in an always in long market. However, until the bears get a strong bear breakout with follow-through, the selloffs will be bought.

Yesterday had two strong rallies and that might be the start of a transition into a small trading range. The Emini gapped down in an oversold market yesterday. The selloff over the past month is strong enough so that the first rally will probably be sold, and there will then be at least a second leg down. No one knows when that first rally will begin, but yesterday’s pause (doji on the daily chart) might be the start of it. Although the gap might become a measuring gap and lead to a move down below 1,700, it is more likely to become an exhaustion gap. This means that the Emini will probably close the gap (rally above Tuesday’s low) within a few days. It might even do so with a gap up day, creating an island bottom. If so, the market would try to rally for a measured move up, based on the height of yesterday’s candle. However, when a selloff is this strong, the odds of a sharp reversal up into a bull trend are small. The best the bulls can realistically hope to get is an end to the selling and the evolution into a trading range. 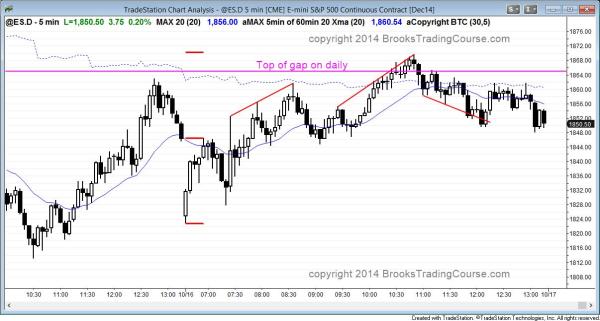 The Emini tested yesterday’s low on the open and then rallied above the gap above yesterday’s high. Despite the strong rally, the day was mostly sideways, and the bear breakout of the past couple of weeks is evolving into a trading range.

The Emini has been in a strong bear breakout on the daily chart and in a parabolic sell climax on the 60 minute chart. Yesterday and today were two-sided and the start of a trading range. The trading range will probably continue. The bulls hope that a major trend reversal will form within the range and lead two a sharp rally. The bears want the trading range to become a bear flag and lead to another leg down. Although a sharp move up or down is possible and even likely, the odds are that the bear breakout will evolve into a big trading range and the any big breakout up or down will probably be limited to a few days and it will then reverse.

Yesterday was a huge doji day and therefore a one day trading range. Today was likely to overlap it most of the day and possibly stay within its range. The open was a higher low major trend reversal and the rally closed the gap on the daily chart. If tomorrow gaps up, this would create a 2 day island bottom and it could lead to a measured move up, based on the height of yesterday’s range.

The bears see today as a pullback in a very strong bear trend. That makes today a sell signal bar on the daily chart. The 60 minute traders see the rally from yesterday’s low as an ABC pullback to the 60 minute moving average. The low 2 short triggered near the end of the day. However, a low 2 late in a bear trend, especially after a parabolic sell climax, usually becomes the final flag. The selloff is usually followed by a strong 2 legged rally, which will probably test the breakout point below the August low of 1891.75, or the breakout point below the 60 minute double bottom of October 8, at 1918.00. Since the bear breakout was so strong, the odds are that there are sellers above, no matter how sharp the reversal up is. This will lead to a test of then bottom of the first leg (as of today, that is yesterday’s low), and possibly a leg 1 = leg 2 move down to the 1700 area. That is below the monthly moving average, which is the target I have been talking about for several months.

Even though today closed the gap on the daily chart, the bears still hope that the gap leads to a measured move down. Although this is possible, the monthly chart is in a small pullback bull trend, and this will tend to limit the selling.

Tomorrow is a Friday, so weekly support and resistance are important magnets. The Emini is in the middle of a huge candle on the weekly chart. The high and the moving average are 50 points above, which is so far above that they probably will not be reached tomorrow. The low is 37 points below, and it is possible that the Emini might close near the low of the week since the daily chart is so bearish and there have been several days with a range of about 40 points. Also, the weekly bull trend line is about 10 points below this week’s current low, and that is a magnet. Unless the Emini has a big move early on, the odds are that the weekly candle will close somewhere in its middle and it will ignore weekly targets tomorrow.