The Emini had a big gap up and the first bar was a strong bear bar, but the 2nd bar was a strong bull bar with weak follow-through. This is a trading range open. The Emini has been working up from that 2nd bar and reached a new high. If the bulls cannot get consecutive big bull trend bars, they instead will hope for a bull channel, like a small pullback bull trend day. If that happens, the upside will probably be limited until the Emini gets closer to the moving average. At that point, traders will decide on trend resumption up or trend reversal down. If the bulls can hold the pullback at the moving average, this could become a big bull trend day. The bears need a reversal and consecutive big bear trend bars.

Traders hoping for swing trading want to see consecutive big trend bars in either direction. Until then, day traders will mostly scalp and many will trade with limit orders, betting breakouts will not go far before pulling back or reversing.

My thoughts before the open: Big gap up

The Emini is reversing up strongly from its test of the September high and of the weekly moving average. This is a strong bull trend reversal after a test of support. Today will probably open with a big gap up. When that happens, the Emini usually goes mostly sideways for an hour or so until it gets closer to the moving average. However, as it creates that initial range, it can have a swing up or down before the range begins. If the sideways to down move toward the moving average lacks consecutive, bit bear trend candles closing on their lows, the result usually will be an opening reversal up from the moving average. Typical patterns are wedge bull flags, high 2 bull flags, or double bottoms (if there is an initial rally, the pullback often forms a double bottom with the low of the first leg up).

If there is a strong bear reversal bar on the first bar or two, that bar is often a reliable sell signal for a swing down, and the day often then becomes a trend from the open bear trend. If that bear bar is followed by several additional big bear bars closing on their lows, the odds of a bear trend day become greater than the odds of an opening reversal up from the moving average. 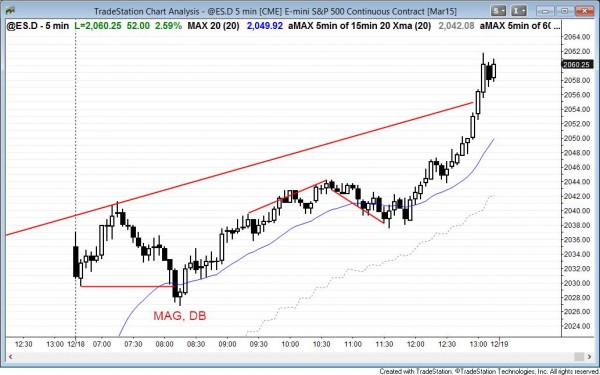 The Emin had a big gap up and then formed a double bottom at the moving average. It became a small pullback bull trend day with an usually big rally in the final hour.

Yesterday reversed up strongly from a pullback below the September high, the weekly moving average, the daily 100 day moving average, and 2,000. Today opened with a big gap up, and as it usually does, the Emini went sideways for more than an hour until it tested the moving average. It formed a moving average gap bar and a double bottom with the open, and then entered a small pullback bull trend. After attempting to test down to the open of the day in the middle of the day, the bulls took control again and created an exceptional rally into the close.

A buy climax into the close sometimes has follow-through buying during the first hour or two on the next day, but there is a 70% chance that there will be a swing trade sideways to down at some point that lasts at least a couple of hours. This reversal up yesterday and today is so strong that the Emini might be able to close the year at an all-time high.