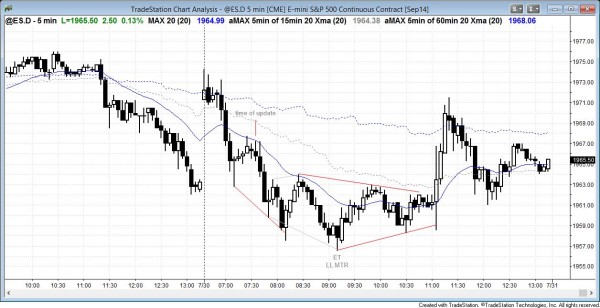 I posted this chart after the close. The Emini sold off early and fell below last week’s low and the open of the month. It then reversed up from an expanding triangle bottom, which is always a lower low major trend reversal. There was an 11:00 am FOMC report. The bear breakout below the triangle failed. The Emini reversed up strongly at 11:05 and had good follow-through for the bulls who bought the reversal. However, it failed to breakout above the to of the bear leg and entered a trading range.

Posted 7:32 am PST.
Today has an FOMC report at 11:00 am. The most important price action in today’s intraday report is the failed bull breakout on an FOMC report day. The Emini broke above yesterday’s bear channel with a gap up opening, and then had a sell vacuum test of yesterday’s low. The bulls will want the market to enter a bull channel up to the FOMC report, and the bears will want the selling to continue down all day. The market usually tries to become neutral before the report. It might create a breakout mode situation, and then have either a trend resumption down or trend reversal up. The Emini will probably enter a trading range or become a weak channel up or down before the report. Less likely, the Emini will have a strong trend before the report. Traders need to be very careful, and scalping before the report will probably be the best approach unless a strong trend develops.

Since the Emini is overbought on the weekly and monthly charts, and it is at the top of the weekly channel, it might use this FOMC report to begin a reversal down today or tomorrow. For example, the FOMC report of September 13, 2012 led to a huge bull trend day. There was strong follow-through on the next day. However, the day pulled back and its high became the high of the next four months. Something like that can happen this time as well. If there is a reversal down, it can come immediately on the report, or the market can rally strongly and then reverse down within a day or two. Less likely, it can trend up strongly and continue up.

Be prepared to trade the FOMC report. It is usually better not to enter until after at least one or two bars because the initial breakout often reverses. Also, the breakout can be so big that the protective stop needed might be 6 or more points. This means that traders need to trade a very small position size. If there is a strong breakout, it is usually good to try to swing the trade because the trend might last for the remainder of the day.