Wednesday was a buy signal bar on the daily chart. Since yesterday was a bull day, it was a good entry bar for the bulls. They are trying to reverse Tuesday’s big selloff.

Yet, the daily chart had 5 bear days. Therefore, traders might sell around the top of Tuesday’s sell climax high. That is also the top of the March trading range. If the bears can reverse the Emini down over the next week, this week’s rally will be the right shoulder of a Head and Shoulder Bear Flag. The March 5 high would be the left shoulder.

Today is Friday and therefore weekly support and resistance are important. The bulls want the week to close above its open. The week would then be a buy signal bar for next week on the weekly chart.

Because last week was a sell signal bar on the weekly chart, the bears want this week to close below last week’s low. Since the week will probably close well above its midpoint, that would not help the bears very much.

The reversal up this week is the 6th leg of a triangle in a bull trend on the daily chart. That means that the bear breakout is failing. Therefore, the odds now slightly favor a bull breakout.

Monday is the last day of the month. The bulls would like the month to close on its high. April would therefore become a good buy signal bar on the monthly chart going into May.

The Emini is down 1 point in the Globex market. Yesterday’s rally ended at the top of Tuesday’s sell climax. That is also the top of the March and April trading range.

The bulls need strong follow-through buying over the next several days. Without it, this 2 day rally will simply be a buy vacuum test of resistance and another lower high on the daily chart.

Because yesterday was a buy climax, there is a 50% chance of at least a couple hours of sideways to down trading today that starts by the end of the 2nd hour.  Since it was sideways for the last 3 hours yesterday, there is already a loss of momentum. There is only a 25% chance of another strong bull day.

Since next Wednesday’s FOMC meeting is important and the Emini is now at resistance, the odds are that it will trade sideways into the report. 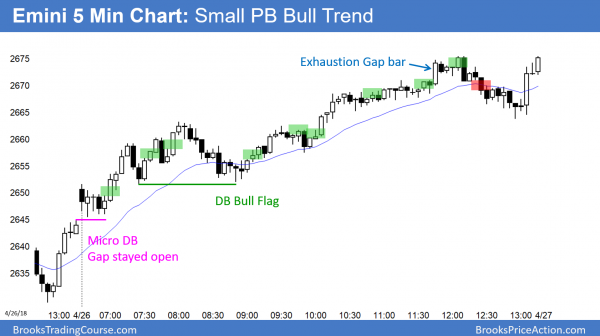 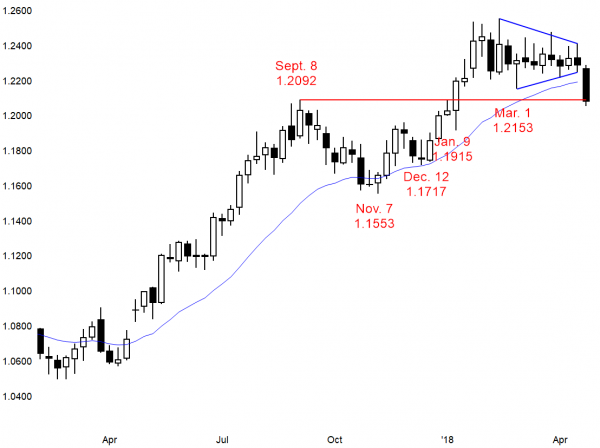 The EURUSD weekly Forex chart has a big bear trend bar so far this week. The bar is breaking below the 4 month triangle, the 20 week EMA, and the September 8 breakout point.

The EURUSD weekly Forex chart is having a bear breakout below a triangle. In addition, it is currently also below the 20 week EMA and the September 8 high, which is the breakout point for the January rally. While there are always buyers at the 20 week EMA, this bear bar is big. Consequently, there may be far more sellers.

If this week closes near its low and if next week has a bear body, the breakout will have a 60% chance of a measured move down. Since the triangle is about 400 pips tall, the measured move target would be around 1.1750. That would be below the January 9 buy climax low.

Furthermore, the September to December trading is now a Final Bull Flag. Consequently, its low is another magnet. That support is the November 7 low of 1.1553.

The bulls need to show signs of strength

The bulls need this breakout to fail. If they can rally today, they will put a big tail on the bottom of the bar on the weekly chart. That will make it a weaker bear breakout bar.

In addition, they need a bull body next week. Even if next week closes slightly above its open, the odds of a 400 pip swing down will drop significantly. The bulls would then have a reasonable chance of making this breakout fail. They want it to be simply a sharp test of support down at the September high and the 20 week EMA. Then, this week would be similar to the November big bear bar that tested the 20 week EMA.

Because the bear bar this week is big, the bulls need a strong bull bar next week. If they get it, traders will assume that the breakout failed. They will then look to buy above that strong bull bar. There is a 30% chance of this happening.

Alternatively, if next week is a small bar, the bulls can first try to stop the selloff. Next, they could try to create a micro double bottom over the next 3 weeks. They then would have a reasonable chance of a higher low reversal up from support.

Because the bear bar is big, and the context is good for a breakout (triangle late in a bull trend), and there is major support below, the odds favor the bears. The bulls need to show signs of strength over the next 3 weeks if they are going to regain control. 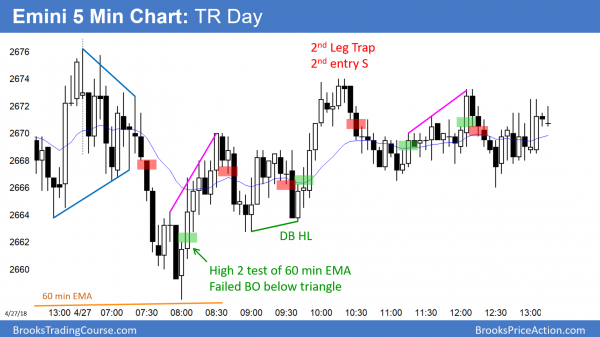 The Emini today had limit order trading right from the open. It spent the day in a series of tight trading ranges.

The Emini today traded in a trading range. It is therefore a pause at resistance after a 2 day bull reversal. Since Wednesday’s FOMC meeting is important, the Emini might continue sideways up the the announcement.