The Emini reversed up from below yesterday’s low and from below the wedge bottom. However, the 1st 3 bars had big tails, and the bar closed back below the top of yesterday’s 2 hour Final Flag. This increases the chances of a lot of trading range price action, like yesterday.

The bulls want a strong breakout above the 60 minute moving average, which would turn today into an outside up day. The bears want this initial rally to fail at the moving average and have an Opening Reversal down for an early high of the day. The 3 big bull bars make it likely that the 1st reversal down will be bought. They also make a bear trend day unlikely.

The bulls have several problems, like the big tails, the stall in yesterday’s trading, and the failure to test the bottom of the daily chart’s Final Flag and the April low. The Emini is Always In Long, but the problems with this early rally increase the chances of a trading range before a 2nd leg up to test the 60 minute moving average and yesterday’s high.

The unemployment report today has the potential to create a big move up or down, or in both directions. I am beginning this blog before the report and I will complete it after the report.

There are several significant things that will affect the Emini’s price action for at least a couple of weeks after the report. The Emini reversed down in April from a new all-time high. This makes April a sell signal bar on the monthly chart. It has a bull body and it is following 2 strongly bullish months. This makes a minor reversal into a pullback more likely than a major reversal into a bear trend. If The Emini trades 1 tick below the 2026 April low, it will trigger the monthly sell signal. The odds are that there will be more buyers than sellers below. That low is also the low of the Final Bull Flag on the daily charts. The Emini is close enough so that it probably cannot escape the magnetic pull of such important support. May will probably trade below April’s low, triggering the monthly sell signal. However, the odds are that the pullback will not last more than a bar or two (1 – 2 months).

The weekly chart is having its 2nd week of pulling back from an 11 bar micro channel. The micro channel had so many bars that it was climactic. I talked about this 3 weeks ago, before last week fell below the low of the prior week and therefore ended the micro channel. When there is a micro channel that is also a buy climax, the pullback usually lasts only 1 – 3 weeks, and then the bulls come back and try to get a new high above the top of the micro channel, which would be a new all-time high. This is the 2nd week of the pullback. The odds are that the Emini will resume up by the end of next week, and possibly after today’s report. Less likely, the pullback will grow into an Endless Pullback, lasting 5 – 10 weeks. If that happens, the odds of a bear breakout and measured move down become close to 50%.

The selloff on the 60 minute chart is forming a wedge bottom. If today breaks below Wednesday’s low, that would be a 3rd push down. Online day traders will then look for a reversal up. That reversal would be coming from the support at the bottom of the April Final Flag and last month’s low.

I always look for the highest time frame that clearly shows a pattern. That is the 60 minute chart. If there is a reversal up, a reasonable target for the bulls is TBTL Ten Bars, Two Legs sideways to up on the 60 minute chart. That is about a day and a half of a rally. The Emini usually tries to test the lower highs in the wedge, which would be about 2060 and then about 2075.

The report just came out and the Emini sold off about 5 points and then bounced. It looks like the report will not be significant, and instead the technical factors that I just mentioned will be more important. The Emini has sold off for a few weeks after a very strong rally, and it is near support. The odds are that it will reverse back up within the next week, but if might have to trigger the monthly sell signal before the bulls come back. Although any day can be a big trend day, the lack of a significant move on the report and the trading range price action of the past few weeks make a big trend day unlikely.

Everyone can see that the Emini is just above support. Traders would like a break below support and then a reversal up because that would have the best potential to lead to a predictable, strong rally over the next week. There is no sign of a climactic reversal yet. This means that the Emini might have to fall below 2026 before the bulls buy again. If instead it breaks strongly to the upside, they will conclude that the 60 minute wedge and the weekly bull micro channel have taken control, and they will look for a rally for a week or so. 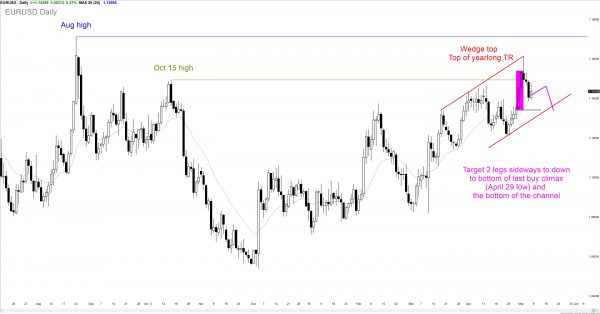 The daily chart of the EURUSD Forex chart is still correcting down after a buy climax. The odds are that the 1st leg back up will be sold and there will then be a 2nd leg sideways to down.

The daily chart of the EURUSD Forex market tested the top of its bull channel, and then reversed down. It has a 60% chance of testing the bottom of the channel before rallying to above this week’s high, if it will rally back up there. A wedge top is a buy climax. A buy climax is usually followed by a couple of legs sideways to down. The selloff over the past few days is big enough to qualify as a 1st leg down. It could fall further, but it has enough bars and it fell far enough to possibly attract bulls. However, the first rally probably be sold, and the EURUSD Forex chart will probably have a 2nd leg sideways to down before bulls would consider buying again for a possibly move above last week’s high and then above the top of the yearlong trading range. The odds are that the EURUSD will be mostly sideways for a least another week, which means traders will buy low, sell high, and scalp.

The EURUSD traded up, then down, and then up in an 80 pip range after this morning’s unemployment report. This is trading range price action, and it is consistent with the reversal down from the buy climax. It the swings continue to be 50 pips or greater, online day traders will scalp for 20 pips. More likely, the 5 minute chart will have smaller swings and day traders will probably scalp for 10 pips, like on most days. If the big reversals continue, many will enter with limit orders, buying below prior lows and selling above prior highs, using wide stops and scaling in.

Those trading the 60 minute chart need a base or a strong bull breakout, which they do not yet have. If they get their rally, it will probably fail below this week’s high and be followed by a 2nd leg down.

The weekly chart has a wedge top since the December low, and this week might become a sell signal bar on the weekly chart. If this week closes near its low, next week will probably fall below this week’s low and trigger the sell signal. The context is good for the bears, and the selloff could test the higher lows in the wedge bull channel, like the March 10 low of 1.0820.

The 60 minute chart still has a chance of at least a small leg up before a selloff on the daily and weekly charts begin. Even if the weekly chart has a bear reversal bar this week, there is still about a 30% chance that next week will break above this week’s high and then test the top of the yearlong trading range around 1.1710. 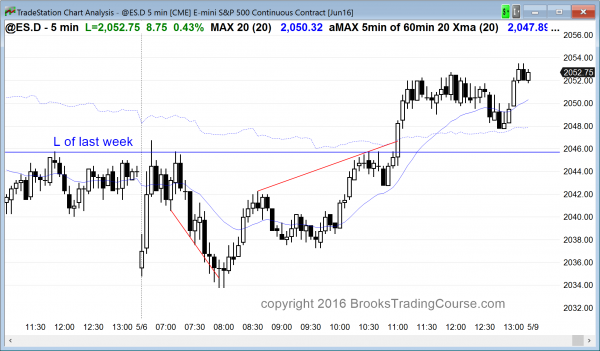 The Emini reversed up from a 6 day wedge bull flag.

The Emini reversed up from a wedge bottom. There are still trend line targets above, so the Emini will probably trade at least a little higher next week.

Since it did not trade close to the 2026 area, this reversal up will probably have to test back down before it tests the April high. The magnets at 2026 include the December 31 close, the April low, and the bottom of the Final Bull Flag.