The bears reversed the Emini down from above yesterday’s high. They therefore are hoping for an outside down day. Because the 1st bar had big tails and the 3rd bar was a reasonable Opening Reversal attempt by the bulls, the bears are not yet strongly in control. Furthermore, yesterday ended with a tight bull channel.

Since both bulls and bears have signs of strength, but neither is strong, the odds favor a trading range open. Furthermore, this increases the odds that the 3 day trading range will continue today. While a breakout can come at any time, this early price action makes it unlikely.

The ranges over the past week have been big. As a result, the legs in the trading range have been big enough for swing trades. Because of the likelihood of an hour or more of early trading range trading, traders will mostly scalp until there is a strong breakout up or down.

The Emini reversed up strongly last week. Yet, it was sideways on Thursday and Friday. Furthermore, it failed to break above the August all-time high. While the momentum up up was strong enough to make a new high likely, the bears hope for a double top. Because the rally was so strong, bulls will probably buy the 1st reversal down. The bears will probably need at least a micro double top this week before they can get any significant pullback. The odds favor a new all-time high within a week or two.

The Emini is still up 5 points in the Globex session. Yet, it is off the high. The Emini has been sideways for 3 days after a strong bull breakout. The odds favor a bull breakout above the 3 day triangle. Furthermore, that breakout will probably lead to a new all-time high. The overnight trading did nothing to create a credible reversal. Therefore, the odds still favor a test of the July 2015 high of 2085.00, which is 18 points above.

Yet, the monthly chart has probably formed a Final Bull Flag, and the upside breakout will probably lead to a reversal and test down to the 1800 bottom of the Final Flag at some point over the next year. 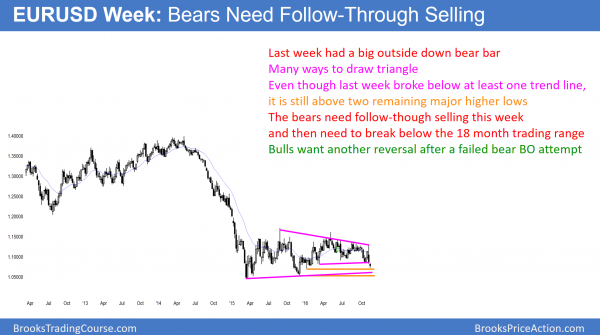 On the weekly chart, the EURUSD had a big bear outside down week last week. Most breakouts fail, and the bears need follow-though selling to increase the chances of success. Furthermore, they need a break below the two remaining higher lows. The bulls are betting that the breakout will be like all of the others and fail.

The weekly chart reversed down strongly after the election. The 60 minute chart has been in a Spike and Channel bear trend since the election. The measured move down based on the height of the election rally is around 1.0680, which is still about 90 pips below the overnight low. In addition, it is still above the December 2015 low of 1.0539. Until there is a breakout below the bottom of the trading range, bulls will continue to buy. This is true of even strong selloffs. It is because they know that 80% of breakout attempts fail.

The momentum down is strong. This increases the chances of at least a little more down. Yet, the odds still favor a failed breakout attempt and a continued trading range.

The EURUSD had a big bear breakout 5 hours ago on the 60 minute chart. Because the bear trend has gone on for more than 20 bars (it is about 100 bars at this point), the odds were that the gap would close. The 5 hour bounce closed the gap. When there is an exhaustive sell climax, the selling usually stops for 10 or more bars. The trading range becomes a bear flag. If the range grows to 20 or more bars, the probability of a bull breakout becomes the same as for a bear breakout. Until then the odds are that the 3 day bear channel continues and traders will sell rallies.

While it is possible for a climax to lead to an immediate reversal, it more often has to transition into a trading range 1st. Because the momentum down is strong and there are still targets below, the odds favor at least a little more down. Yet, unless there is a big bear breakout below the 18 month range, the odds favor that the EURUSD selling will end within the next 100 pips. It would then be followed by a bull leg in the range.

Since the range has lasted a long time, it will probably breakout within the next 6 months. It is still a bear flag on the monthly chart and it has less than 20 bars. The probability still is greater for the bears. 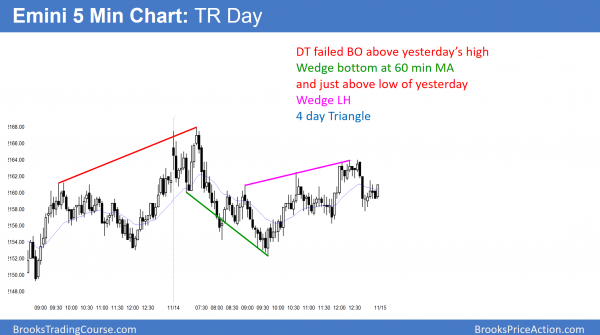 The Emini reversed down from a wedge top above yesterday’s high. It then rallied from a wedge bottom. Today was the 4th day in a trading range on the daily chart.

While the bulls reversed up again from the 60 minute moving average, they failed to reach the day’s high. As a result, today was the 4th trading range day after the election. The all-time high is only 20 points higher and it is a magnet. As a result, the odds still favor a test of that high. Yet, of the bears get a strong reversal down this week, they will see last week’s rally as a buy vacuum test of the high. Furthermore, they will see the rally as forming a double top with the August high. Because the momentum up last week was strong, the probability still favors the bulls.