The Emini opened in the middle of yesterday’s range and the 1st bar had prominent tails above and below. It did nothing to change the minds of traders. It therefore increased the odds that yesterday’s limit order market trading will again be common today. Without a strong breakout up or down, the odds favor another day with a lot of trading range price action.

Because the daily chart has a strong double bottom, a break below the double bottom could lead to a quick measured move down. It would also be the 3rd month in the pullback on the monthly chart. The October low is 2107.75, which is only 10 points below and within reach today. The bulls need to reverse up from any test down to that area.

At the moment, the Emini is Always In Short after 3 bear bars. Yet, it is still within yesterday’s range, and all 3 bear bars had tails. While the bear bars are bearish and there is room to the October low, the bears have not yet done enough to make traders believe that today will be a strong bear trend day. The bulls want an early reversal up from bear yesterday’s low.

In conclusion, the opening increases the chances of a bear trend day, but if they get a trend down, it will probably be weak, like a trending trading range day. If the selloff falls below the October low, today could become a huge bear trend day. While today could become a bull trend day, the odds are against it. The best the bulls will probably get in the next 2 hours is a trading range.

Today is the 1st day of the month. The Emini has pulled back for 2 months. If November trades below the October 2107.75 low, it would therefore be the 3rd month with a lower low. Hence, that would increase the odds of a drop below the July 2015 top of the 2 year trading range.

While the Emini is in breakout mode, there is no breakout yet. Because it is at the apex of a triangle, the breakout up or down will probably come around the election. There is a 50% chance that the initial breakout will fail and reverse. Furthermore, there is a 50% chance that the successful breakout will be up or down. Because the Emini is so close to the July 2015 high and it has been below the daily moving average, the probability for the bears is slightly more than 50%.

Since yesterday was a very small trading range day in nested trading ranges, the odds favor more trading range price action today. Yet, traders expect a breakout soon. They will therefore be ready for a big move, even before the election. However, after the election is more likely.

While the Emini rallied early last night, it has pulled back for the past 6 hours. Yet, it is still up about 5 points. It will probably open near the 60 minute moving average, and it might gap above it and yesterday’s high.

Since the August 2 trading range low has been the most important price over the past 2 months and it is only about 10 points above yesterday’s close, that is a logical target for the bulls today. Because of the nested trading ranges on the daily chart, the odds are that any rally will only last a few days. The Emini will probably wait for the election before breaking out of its nested trading ranges. 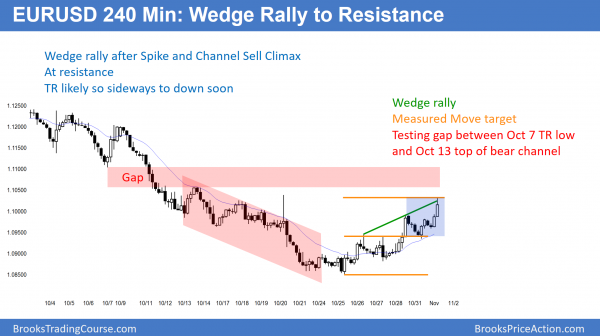 The 240 minute EURUSD Forex chart rallied in a 3rd leg up to resistance. This is a wedge buy climax. Hence, it will probably test down for a couple of legs starting today or tomorrow.

The 60 minute EURUSD chart had a buy climax on Friday. Hence, the odds favored yesterday’s selloff to the bottom of the buy climax bar. Because the selloff lacked big consecutive bear bars, the odds were that buyers would buy the test. It was also a test of the top of last week’s trading range. As I mentioned yesterday, it would probably bounce. Yet, the bounce was small. Like all financial markets, it will probably be mostly sideways going into the election next week.

The EURUSD Forex market sold off in a Spike and Bear Channel sell climax for 3 weeks. As was likely, it has rallied and is testing near the top of the bear channel. The rally more than met the minimum goal of 2 legs and 10 bars sideways to up.

While the rally could continue indefinitely, it is testing the breakout point at the bottom of the September trading range. Furthermore, it is doing so in a wedge buy climax at a measured move target. In addition, it is now near the top of the bear channel that began on October 13.

I have been saying for 2 weeks that the early October sell climax would probably lead to a big trading range. Also, I said that the top of the range would probably be around the top of the bear channel. The current rally is in a resistance area that is a logical top of the developing trading range that began with the October 13 bear channel. Hence, the odds are that it will soon test down for a couple of days to test the most recent higher low, which is yesterday’s low.

It might rally another 20 – 30 pips to the gap below the September trading range 1st. Yet, the odds are that it will pull back at least 80 pips this week. At that point, bulls will be disappointed and traders will see the the chart as a trading range since the October 11 bear breakout. It would therefore again be in breakout mode, and this will probably happen before next week’s election. 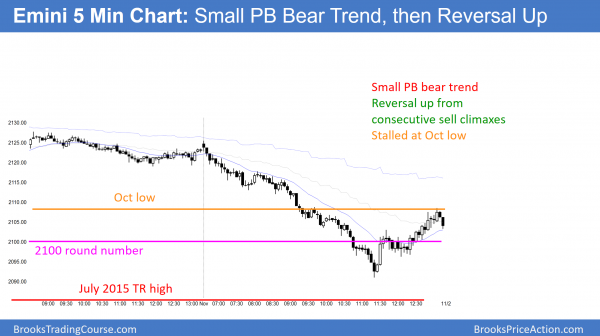 THe Emini sold off in a Small Pullback Bear Trend to below 2100 and the October low. Yet, it reversed up strongly from just above the July 2015 top of the 2 year trading range after a series of sell climaxes.

The Emini had a sell vacuum test of the 2100 big round number and the July 2015 high. Buyers reversed the Emini up sharply from the sell climax. Yet, the odds still favor a break below the July 2015 high and a test down to around 2050. If the bulls instead create ig bull trend bars tomorrow, the Emini will then probably rally to new high.

While tomorrow is an FOMC meeting, most traders believe the rate hike will be in December. This therefore creates a possible Black Swan event tomorrow. If the Fed raises rates, it will be doing a low probability thing. The result can be a huge move up or down.