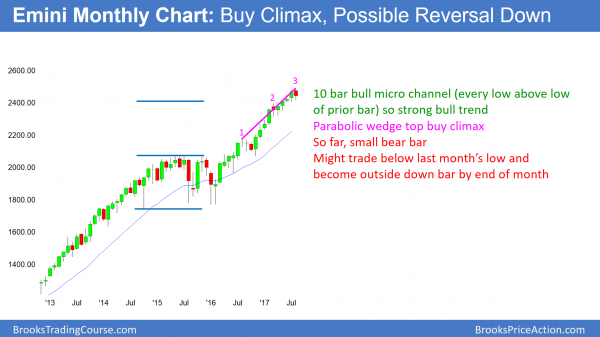 The monthly S&P500 Emini futures candlestick chart has a bear body so far this month. If August trades below the July low, it will be an outside down month. In addition, it is in a 20 month tight bull channel that has had 3 pushes up This is therefore parabolic wedge buy climax. Finally, since every bar for the past 10 bars has a low above the low of the prior bar, this is a micro channel. When one forms late in a bull trend, it, too, is a type of buy climax.

The monthly S&P500 Emini futures candlestick chart has been in a strong bull trend for 8 years. In addition, it has rallied especially strongly for 20 months. The low of every bar for the past 10 months is above the low of the prior month. This is extremely strong buying. Since it is occurring late in a bull trend, it is likely too strong. Hence, it is climactic.

Yet, a buy climax in a tight bull channel only has a 20% chance of immediately reversing into a bear trend. A reversal usually requires a transition into 10 or more bars of sideways trading before traders become confident that the bears might be strong enough to take control. Consequently, the odds are that the best the bears can get over the next few months is a pullback and not a bear trend. A pullback means that the odds are greater that it will lead to an attempt to resume the bull trend instead of reversing it.

Possible outside down month

This month so far has a bear body. While it could rally over the final days and have a bull body, it would probably be a doji. This would be poor follow-through buying. Additionally, the 20 month rally is in a parabolic wedge bull channel, which is a buy climax. That therefore further increases the odds of a pullback beginning soon.

Alternatively, the Emini could trade below the July low by the end of the month. This is unlikely at the moment. Since it traded above the July high, that would turn August into an outside down month. That is a sign of strong bears. It therefore would increase the odds that a 2 – 3 month pullback might be beginning.

Once a pullback lasts that long, traders begin to refer to it as a trading range. Since a trading range always has a reasonable buy and sell setup, the odds of a reversal down eventually could approach 50%. 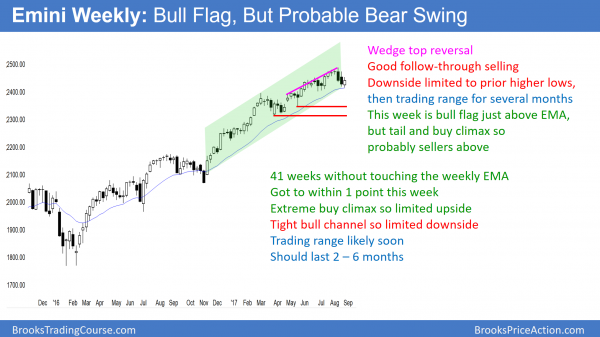 The weekly S&P500 Emini futures candlestick chart has been above the 20 week exponential moving average for 41 weeks. The bulls hope that this week was an adequate test of the average. If so, bulls will buy, since this would be a 20 Gap Bar buy setup. There has been a gap below the low of every bar and the moving average for more than 20 weeks. This means that the bulls have been so eager to buy that they have been buying above the average price. Many bulls will be eager to finally buy at the average price.

The weekly S&P500 Emini futures candlestick chart has been very unusual. It has never been this far above its 20 week exponential moving average for 41 weeks in its 18 year history. It is now very close to the moving average.

How does a moving average test take place?

By Friday’s close, there was enough of a selloff from Tuesday’s close so that the EMA fell back to one point below this week’s low. Hence, it has not been touched in 41 weeks. The odds are that the low will touch the weekly average within the next few weeks. Furthermore, it typically falls 20 – 50 points below once it finally touches.

Bull flag at the moving average

It does not matter that the assumption was wrong. Since many traders and computers will conclude incorrectly that the pullback reached the average, all that matters is their conclusion. It is irrelevant that their reasoning was wrong. They will look to trade based on the assumption that it did. As a trader, that is the only concern, not what really happened.

As I said above, this did not happen this week. I am only making a point about how moving averages work. This week’s low ended up just above the moving average. While that is close enough for the bulls to conclude the test is over and the bull trend will resume, the odds are that the Emini has to trade below the average soon.

Since 41 gap bars is extreme, the odds are that the pullback will last about 10 bars. Therefore, even though this week is a buy signal bar, there will probably be sellers above. Hence, the 1st reversal up will probably fail and lead to at least one more leg sideways or down.

Since the weekly chart is so strongly bullish, the break above this week’s high could lead to a new high. However, since a 10 week trading range is likely, that new high would probably reverse back down. Consequently, it would therefore probably simply be a failed breakout early in a developing trading range. 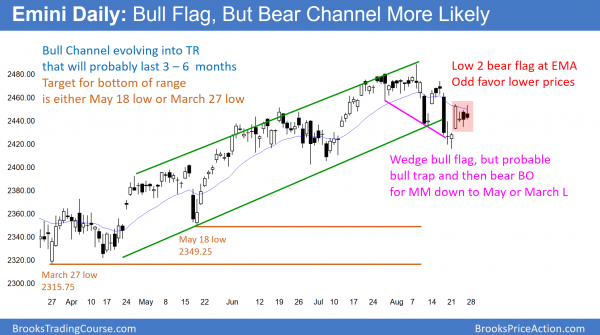 The daily S&P500 Emini futures candlestick chart is reversing up from a 2 legged pullback. It is also a wedge bull flag when including the July 27 low. Yet, it is forming lower highs in a bear channel, and has a Low 2 bear flag going into Monday. Therefore it is in breakout mode.

The daily S&P500 Emini futures candlestick chart pulled back from Tuesday’s strong bull breakout. This pullback is therefore likely a bull flag. Furthermore, the Emini has a bullish bias from August 26 to September 5. This adds to the likelihood of a test up next week.

The bears need a series of major lower highs to continue their broad bear channel down from the all-time high. Consequently, if the bulls break strongly above the August 16 major lower high, most traders will conclude that the bulls won. They therefore will assume that the Emini will be in a trading range or a bull trend.

The Emini is in a broad bear channel. Therefore, the bears will sell again around the middle of the last leg down. Hence, that is around Tuesday’s high. Friday’s Low 2 bear flag just below the moving average could be the start of the next leg down.

Since the Emini is seasonally bullish over the next week and there is a bull flag on the weekly chart, the odds are that the Emini will test higher over the next several days. If the bears are in control, they will start to sell again there, and especially at and below the August 16 major lower high. The math favor the bears, even if the Emini trades up a little next week.

There is a wedge bull flag created by the lows of July 27, August 10, and this week’s low. When there is a strong reversal up from a wedge bull flag, like on Tuesday, it creates a possible bull trap. The bulls bought strongly, confident that the bull trend is resuming. What will they think if the bears break below the bottom of the wedge bull flag? They will give up.

Whenever the Emini falls below an obvious location for a stop for the bulls, there is generally a 50% chance that the bear breakout will fail. This means that the bulls will get another reversal up.

However, Tuesday’s reversal up was very strong, and therefore was created by confident bulls. If they get stopped out, many will be hesitant to buy again. In addition, the weekly buy climax will likely need 2 – 3 months before the bulls will return on the weekly chart. Consequently, the odds that the bears would get a measured move down if they break below that wedge are almost 60%, not 50%. If they get a strong breakout and follow-through selling, the odds would rise to above 60%. This is because the trapped bulls would conclude that the 5% correction was underway and likely to test the start of the 6 month bull channel at the March low.