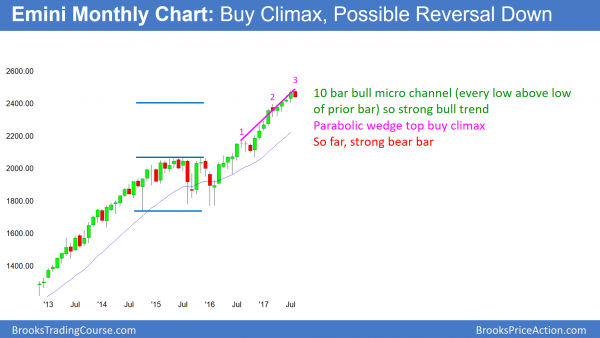 Each bar for the past 9 months on the monthly S&P500 Emini futures candlestick chart has had a low above the low of the prior month. This is therefore a 10 bar bull micro channel.

The monthly S&P500 Emini futures candlestick chart has been in a bull trend for 8 years. The 19 month rally up from 1800 has been in a tight bull channel and is therefore very strong. Yet it has 3 legs and the channel is tight. It is therefore a parabolic wedge. A parabolic wedge has a 40% chance of leading to a major reversal. There is a 60% chance that the reversal will fail and become a bull flag.

The current 10 bar bull micro channel is unsustainable and therefore climactic. This micro channel contains the 2nd and 3rd legs of the parabolic wedge. The 1st pullback in a bull micro channel typically lasts 1 – 3 bars. However, a pullback from a parabolic wedge rally often lasts 5 – 10 bars. Therefore, the odds are that if this week is the start of a pullback, it will probably last only a few months, but it might last a year. In either case, there is a 60% chance that it would then have at least a small bull breakout.

This pullback will probably be mostly technical. It will be more the result of a rally that has gone too far than by a sudden change in the market’s fundamentals. Technical corrections tend to be brief, as this one probably will be on the monthly chart. 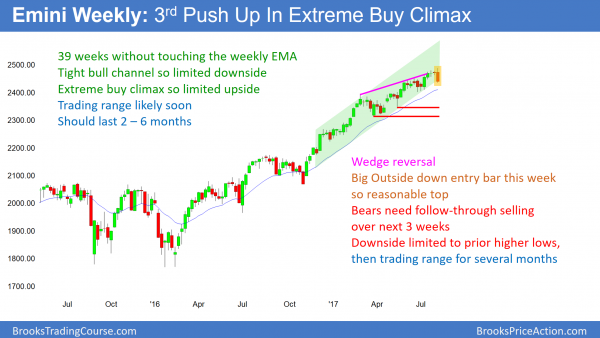 The weekly S&P500 Emini futures candlestick chart traded above last week’s high and then below last week’s low. This is an outside down week and a sign of strong bears. Since the chart has been above its exponential moving average for 39 weeks, it is extremely overbought.

The weekly S&P500 Emini futures candlestick chart is fascinating because it has never been this overbought in its 18 year history. It has never been this far above the 20 week exponential moving average for this many weeks. In theory, the bars never have to come back to the average price. In reality, they do 100% of the time. The pullback usually comes within about 20 bars. This is now 39 bars, which is extreme. Extreme means unsustainable and therefore climactic.

Since buy climaxes usually lead to about 10 bars and 2 legs sideways to down, that is likely here. Hence, if the correction has begun, it will probably last 2 – 3 months. In addition, it will probably fall at least 20 – 40 points below the weekly moving average, as it typically does. Since the average is now around 2420, that means the correction will likely reach 2380. That is close enough to the May higher low at around 2350 to make that a reasonable target over the next few months.

There is always a bull case. Yet, since this buy climax is the most extreme in history, betting that it will continue much further without dipping below the moving average is a low probability bet. More likely, the bulls will wait for a couple of months before they will be willing to buy again. 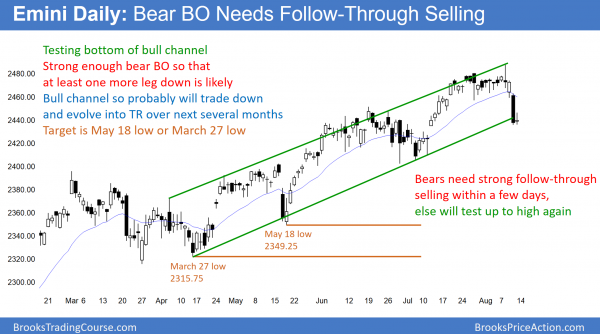 The daily S&P500 Emini futures candlestick chart has been in a bull channel for 6 months. Since a bull channel has a bear breakout 75% of the time, it behaves like a bear flag. Thursday’s reversal and Friday’s follow-through have shifted the probability in favor of the bears. The minimum objective is a 2nd leg down. The next targets are the higher lows in the channel.

The channel began with March 27 low. Most channel reversals find support at the beginning of the channel. Therefore, if this selloff continues down to that low around 2315, the bears will begin to take profits and the bulls will buy again. Consequently, there is usually a rally from that low.

Yet, a move down there would be big. After the big rally that began in March, that selloff would create a Big Up, Big Down pattern. As a result, traders would be confused. Since confusion is a hallmark of a trading range, the bull channel will have evolved into a trading range.

Once traders conclude that the bulls and bears are balanced, they switch to buying low, selling high, and taking quick profits. That means that the rally from the test of the March low would probably form a lower high. If the Emini then tests back down a 2nd time, traders would see that lower high as the right shoulder of a head and shoulders top.

Because most tops fail to lead to trend reversals, there is only a 40% chance that there would be a bear break below the neck line and then a measured move down. However, the 1st selloff down the March low, the rally back up, and the test back down could take many months. Therefore, the bull trend might be beginning to convert into a trading range that could last at least 3 – 6 months.

Trends resist change. Because the bull trend has been in a tight channel, the chance of it immediately reversing into a big bear trend is small. Consequently, the current reversal will probably be minor. This is true even if it falls to the March low over the next 3 months. While a 150 – 200 point selloff would be a small bear trend on the daily chart, I think it would be more accurate to call it a big bear leg in a developing trading range.

While the bears would have a 40% chance of a break below the trading range and a swing down, the odds would still favor a bull breakout. If the range extends to 50 or more bars, then the probability for the bears would be about the same as for the bulls.

The bulls will buy this selloff before it falls to the bottom of the March pullback. It is impossible to know if they will be successful. If they are, this selloff will not be deep and the bull trend will soon resume. That happened many times over the past several years. Most noteworthy were the failed selloffs in 2014 and 2015.

Although they might succeed in reversing the trend back up over the next couple of weeks, the odds are against a rally far above the old high. This is because of how extreme the weekly buy climax is. In addition, the 6 month bull channel will probably need at least a 50% and 2 legged correction before the bulls would be confident that the bears had failed.

Because Friday had a bull body, it was a bad follow-through day for the bears. Furthermore, it is now a buy signal bar for a failed bear breakout. Sometimes follow-through selling comes after 2 – 3 days. Yet, if the bulls get a big bull bar on Monday or Tuesday, they will have erased the bearishness of Thursday’s selloff. A 10 point tall bull body on the daily chart will reduce the probability for the bears to about the same as the bulls. However, if the bulls get two 10 point bull bodies or one 20 point bull body, the Emini will probably test the all-time high. In any case, the odds are that a 2 – 3 month correction has either begun, or it will begin after a test of the high.