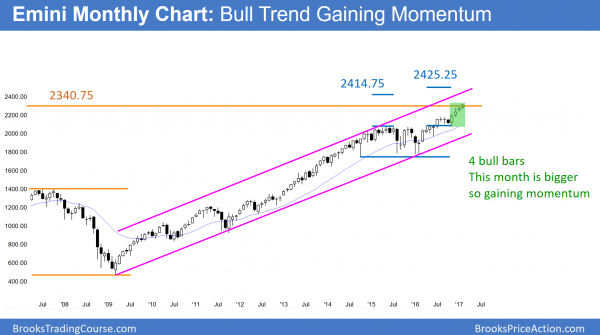 The monthly S&P500 Emini futures candlestick chart has a bigger bull bar this month. It is therefore accelerating up in a buy climax.

The monthly S&P500 Emini futures candlestick chart is in a bull trend. Furthermore, it broke slightly above a measured move up from the 2007 to 2009 selloff. Since this 4 month rally has 4 consecutive bull trend bars closing above their midpoints, it is strong. Therefore, the bulls will probably buy the 1st pullback. Hence, the bears will probably need at least a micro double top before they can get a reversal.

Furthermore, the 1st reversal will probably become a bull flag. As a result, the best the bears will probably get over the next couple of months is a small trading range. 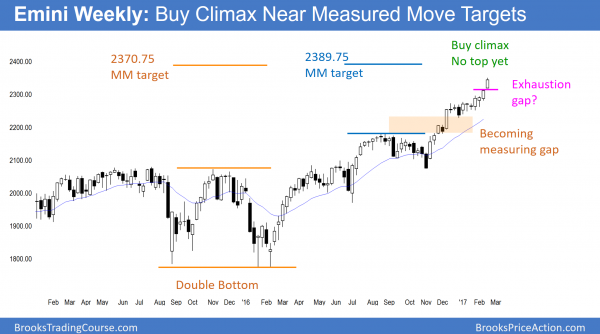 The weekly S&P500 Emini futures candlestick chart gapped up this week. While a gap up is a sign of strong buying, when it forms late in bull trend, it is more likely an exhaustion gap. Therefore, the Emini will probably close the gap within a month or two.

A buy climax does not mean the start of a bear trend. Instead, it means that the rally has gone so high that many bulls will take profits. Yet, they correctly believe that the trend is still up. Hence, they will look to buy again at support, usually within 10 bars. Therefore, even if the Emini sells off 5% down to the December 30 low of 2228, the bulls will probably buy the selloff.

Because there are several measured move targets around 2375, this rally might be a buy vacuum test of that resistance. Hence, bulls might take profits and bears might sell around 2375. Yet, when a rally has 7 consecutive bull trend bars like this, the odds are that the bulls will buy the 1st reversal down.

If they have been willing to buy above the high and low of the prior week, they will probably be eager to buy below last week’s low. Therefore, they will probably buy the 1st selloff. Furthermore, the bears will probably need at least a micro double top before they can create more than a one week pullback. Hence, the downside risk over the next couple of weeks is small. 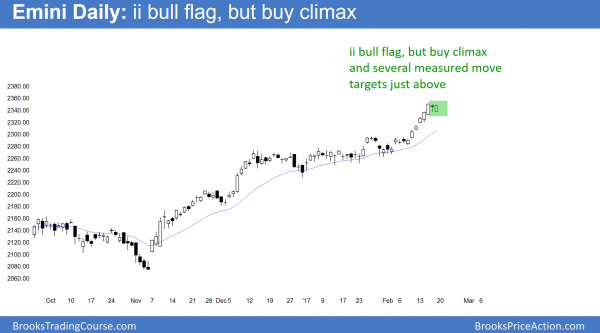 The daily S&P500 Emini futures candlestick chart rallied strongly this week. Because Thursday and Friday were consecutive inside days, they formed an ii bull flag.

The daily S&P500 Emini futures candlestick chart is in a strong bull breakout. After 6 strong bull bars, it went sideways on Thursday and Friday and formed an ii bull flag. While the bears see those days as a sell signal for a failed breakout, there are more likely buyers below. Yet, the buying is unsustainable. Hence, it is a buy climax. Therefore, the Emini probably began a trading range on Thursday.

As strong as the Trump rally has been, it is near measured move targets. For example, the Emini was in a trading range for 2 years on the monthly chart. A trading range late in a bull trend usually becomes the final bull flag. While there are different ways to draw the measured move projections, they are between 2375 and 2425.25. Hence, there is resistance just above.

Furthermore, a breakout from a final bull flag often reverses around a measured move up. In addition, the reversal down usually reaches the bottom of the flag. Therefore, the odds are that the Emini will test back down to 1800. Since this is a monthly chart and the reversal will probably last at least 10 bars, that would be a year. Because there is no top, and the top might not form for more than a year, the Emini might not get down to 1800 for 2 – 3 years. In the meantime, it could go much higher. More likely, it will probably form a top above 2400 before correcting down to 1800.