Question: I bought the 14 close, okay, and took a 16-point swing but decided to keep trading and got short many, many times and wiped out significantly more than I made up to that point. Is there anything about today that was a warning against shorting near the highs?
Video duration: 4min 56sec 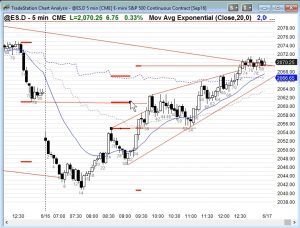 However, the reality is with all traders they have an approach to trading, and it works for some things and it’s bad for others.  So as long as your wins are bigger than your losses, you’re okay.  So doing what you did is okay.  You were fading, right?  You were buying a bear trend and then you switched to selling a bull trend, and the bull trend went on for a long, long time. So every time you kept selling near prior highs, you kept getting killed, right? Sell on the 25 high.

Now, what you’re doing probably was logical, so you know what I’m going to say, right?  Any time you do something logical as a trader, as long as you can follow it up with good management and wide stops, you can usually avoid a loss.  But you have to trade small and you have to manage well.  So let’s say the market’s rallying over here [B35] and you sell that close or sell that high [B25], right?  Well, your minimum stop probably has to be at least a measured move up, right? So your stop is a little bit above there [MM top 2064]. So if you sell that close, you wait for a bear bar and you sell more here below 40, okay.  And then you have two choices at that point: One is you decide to get out at the midpoint between your two entries or you try to get out at your first entry with a profit.  So let’s say you sell — let’s do it his way — okay, so you sell with a limit order right here at the 25 high, okay, and you say, “Well, that’s not good. Look at that breakout,” and you sell more one point below 40.  I have to try to shrink this down. So you sell more at one tick below 40, right? So here are your two entries, short here and short here.  And what took place here [B41], right? It tells you a lot of traders did exactly what you did and there’s so many of them with limit orders to get out breakeven that they could not get filled. The ones who were patient got filled over here [B49], right, and part of the reason for this reversal probably was a lot of scale-in bears buying back their shorts, so this is probably short covering here.

And so to me, that’s probably what you need to be working on: Trading small and not panicking, just trying to manage your trades.  The opposite was true over here, right?  You had Buy The Close bulls here [B24] and some of them used a wide stop below here [B22]. Maybe all the way down to the low of the day. They waited for a decent bull bar and they bought more here [B31]. A lot of them tried to get out breakeven, which was easy to do. Others — breakeven on the entire trade — others tried to get out breakeven at that low [B25].  But when the market started to race up past that 25 low, it tells you that it’s a buy.  So instead of bulls panicking, saying, “Oh my gosh, thank you for letting me out breakeven,” the market was racing up.  So to me, that’s a sign that we’re going higher.

So I don’t know if I’m making any sense, but I think the key is to trade smaller than what you think small is — so trade very small; use wide stops, and scale in.  And if you’re buying, you scale-in, buy above a bull bar.  Make sure it’s at least — I would say at least a couple scalp prices down.  So if we’re trading the Emini, a scalp is one point. If I’m going to buy that close [B31] and I’m looking to buy above a bull bar, I’d want the bull bar to be at least a couple points below my first entry.