Question: What were the final steps which you employed to become profitable?
Video duration: 6min 50sec

There were so many steps along the way, right? The single biggest thing was giving up on everybody. Back when I was doing this in the ’80s, there were so many dishonest people out there. It was incredible. Pretty much any ad that you saw, I believe, was put there by a thief, a liar. Even in reputable magazines, all the ads about “get rich quick,” “buy this software,” it was all lies. It was just totally all lies.

I grew up trusting people with more experience than me. I was an eye surgeon for years, and in medical school you’re being taught by people who are very reputable, very honorable. That’s true with most professional schools. Law school, business school. It doesn’t take much time to realize that the people are really honorable and they’re really trying to do a good job. They’re trying to be nice people, they’re trying to help you. So I grew up with that kind of experience. College, same thing. The professors were all good people, really interested in helping.

And then you enter the trading world, especially in the ’80s when I did. I immediately assumed that all the people out there are honorable like university professors, medical school professors, business school, and law school professors. But they’re not! They were all out there trying to steal money from people who didn’t know any better, by selling products that they make claims about and they charge a lot of money for their products.

I remember once, maybe it was ’87, ’88, there was some company out there I paid $3,000 for their special software that they guaranteed all kinds of great returns. Every day, they would send me the latest update of the input into their indicators. I don’t remember the name of the company, but I think eventually, the SCC sued them, put them out of business. I don’t know if they were arrested or put in jail, but the SCC ultimately decided that the firm was a lie.

And guess what? The numbers don’t work tomorrow. They worked today because they were generated, they were curve fitted based upon today’s price action. And they were doing that every day. At the end of the day, they would come up with the numbers that would have worked best on the day, and then they would make the claim that had you used those numbers, you would’ve used a fortune today.

However, they were fitted to the market to maximize profit in hindsight, after you’d already seen the day. There’s no reason to believe that those numbers are going to work tomorrow. However, they would produce these track records based upon generating the numbers after they see the chart, and they were coming up with all kinds of incredibly great results. But that was the result.

I hired a tutor once, close to 30 years ago, and I paid him I don’t know how much, $3,000 or $5,000. He’s still out there today; I’ve seen him at conferences. I pressed him on a lot of things. I think I lost $3,000 when he was in my house trading. I pressed him on a lot of things, and ultimately he told me that he does not trade, but that he has people who trade his system, and trade his money for him. I couldn’t believe it. The guy is out there claiming to be a great trader, and doesn’t even trade.

I spent a lot of money in the early ’90s and the late ’80s hiring experts and going to conferences, and at the end, I concluded that it was all nonsense and the people were just dishonest people. They were just trying to take money from people who didn’t know any better. At the time, the law did not protect people as well as it does today. So it was very easy for dishonest people to steal money from people who didn’t know any better, people who were just trying to figure it out.

Figure out what market is doing

Anyway, after 10 years of it, I decided that, as trusting as I had been all my life of elders and people who I thought were out there to help me, I decided that the people are all liars, and they’re thieves, and dishonest people. Everything I was reading in magazines, and books, and ads, and seeing at conferences, was just all nonsense. Yes, pretty colors and pretty charts and pretty graphics and everything, but it’s all nonsense. It has nothing to do with making money.

Focus on why you lose, and why you win 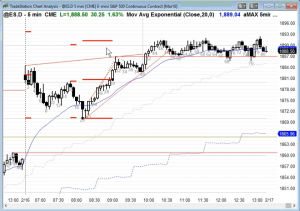 It didn’t take long to figure it out, because at times when I would lose money, I started to see that there were clear things that were happening that caused me to lose, like buying at the top of a trading range, selling at the bottom of a trading range, taking tops in strong bull breakouts, selling in this [B20-B30], buying this [B3], betting on regression to the mean, and that the breakout would fail. It did not take long for me to begin to see what signs of strength really are, and how important they are.

So if the market is going up and it looks pretty strong, I can only buy. If it’s going down and it looks pretty strong, I can only sell. You do it long enough, you look at a chart that you print out at the end of the day, and there’s something in the chart that you’ll see that the probability was high that you’d make money. So if you print this chart out, you’d see somewhere in here [B22 up], if I bought this reversal up that’s a lot of bars up, I’m going to make money. That’s all you have to see. You just need to buy somewhere in here [B20-B30], stop below there [B20], and you’ll probably make a measured move up.

Let’s say you decide somewhere in here [B29] that you’d make money. Let’s say you bought somewhere in here. At the point that you decide that you’ll probably make money, so probably when it’s 60%, your risk is here [below B20]. At that moment, you probably are going to make about the same amount that you’re risking to take the trade. So you’re probably going to get a measured move up from the place where you finally decided, yeah, the probability is high for the bulls. 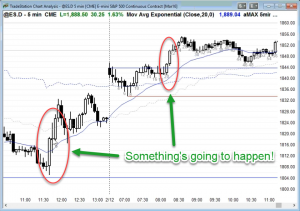