Question: I am stuck! Do you have a live trading room where we can look over Al’s shoulders or others who are consistent like him to APPLY in REAL-TIME what we have learned? Believe me, I don’t need to ask questions, just listen to him or them.
Video duration: 3min 46sec

Sell or wait to trade 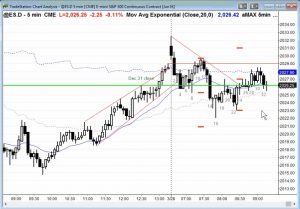 That big tail on the bottom of 31 is enough to make me not take this sell.  And I’m not going to buy here.  To me, you’re just either selling this or you’re waiting.

Swing bulls — they can buy hoping that this is a bull channel, that all the pullbacks are just one or two or three bars.  Here’s a four-bar pullback that weakens the argument. They know there’s a magnet up there, yesterday’s high and the 11 lower high, and they know that there was a big tail on the bottom of 31 making a lot of bears not willing to sell.  However, it’s a wedge and a micro-double top, and there is a bear body and we’re at the 60-minute moving average, and that is why I’m not willing to buy below 31.  If 31 closed on its low, I probably would have sold it for a scalp.

Let me just take a moment to talk about how I do the scalps on a day like this, okay?  Bull breakout above a bear channel; I expect it to trade down. Bear close 1; I’m looking to sell, you know, sell the close, sell the close. Weak buys, so I’ll look to sell above 3.  Pair of bull bars; probably buyers not far below, so I’m looking to buy. Pretty good reversal. Probably at least a little bit more up, but I still think we’re Always In Short and there are sellers around here, so I think if I’m doing anything here, I’m selling.

Wedge three pushes up, five, nine, and 11. So probably going to get at least a pullback here so traders will sell the 11 close or they’ll sell below 12.  Bear bar 13, but big tail.  I don’t know, I suspect we’re going lower.  Big bear breakout, probably going at least a little lower, so traders are selling.  15, similar to 3; it’s not enough to reverse that, so probably sellers above.  16, a micro-double bottom, a big High 2 buy.  The bears should not have allowed that big of a reversal.

Probably going up at least a little bit.  I’d rather buy with a limit order.  So 19, 20, I’m looking to buy below — stop below 16.  If I get stopped out, I’ll buy more.  22, higher low, but I’m already long from either below 20 or one point lower. 23, big enough bull bar; 24, absence of a bear body, probably going at least a little higher so either buy with a limit order below bars or take a chance, buy the 24 close, stop below 23.  Then 28, slightly better odds for the bulls than the bears, but you can do either one; you can either sell the 28 close, stop a couple ticks above 11, or you can buy the 28 close and buy more lower.  29, disappointed bulls; a lot of the bulls will try to get out breakeven at the 28 close.  That means that we may pullback at the 28 close; probably sellers above 29.