Question:  I was able to read the price action pretty well today, but have a hard time trusting my read.  Do you ever have the same problem, and do you have any suggestions?
Video duration: 8min 10sec

Trading psychology: In a gray fog 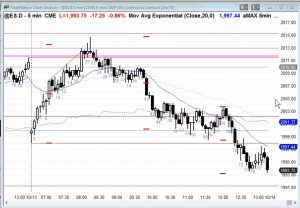 Compensating for lack of clarity

It’s clear that that’s what you do.  The probability is higher than 60 percent; it’s probably 70 percent that the best way to make money is to trade in the direction of the breakout.  During the rest of the day, you’re in that gray fog where everything is 40 to 60 percent. If you’re reasonably confident, you’re 60 percent certain.  If you’re really “I’m not confident at all,” you’re 40 percent confident.  Pretty much everything during the rest of the day is 40 to 60 percent, any buy, any sell.  And if you prefer high probability, you have to be able to know where your stop is, and it’s better to trade in the direction of Always In.

So let’s say on bar 42 close you decide, okay let’s say somewhere in here, Bar 46 close. You’re deciding where the high probability trade is.  Well, first you have to decide Always In Long or Short.  Probably still Always In Short. Next, you have to decide on where your stop is.  Maybe up here [above B39/40], maybe — maybe if you want a tight stop here [above B46]. So then you say, “Okay, I’m going to sell the 46 close, so I’ll sell below 47, and I’ll put a stop here or here. And if I’m able to, I’ll add on higher, either with a limit order or wait for a rally and then sell below a bear bar, like below 67 or below – we didn’t get much of a rally here.” But that would be the general idea. That’s how you can increase your probability in an environment where the probability is 40 to 60 percent.  You scale in.

And another question: Al, did you ever have the same problem?

Making same trading mistakes over and over

I’m assuming it’s in reference to the question I just answered. I’ve had every problem — every problem that you can imagine.  Every problem that you’ve had, I’ve had it, plus I’ve had dozens that you’ve never encountered but you will if you trade long enough.  I’ve done this close to 30 years now, and I’ve screwed up in every conceivable way.  And I’m really smart, so I’ve been able to come up with all kinds of ways that most people would never think of, and I’ve screwed up in all kinds of special ways.  But I’ve screwed up in every way. And I’ve done the same mistake sometimes dozens of times over the course of years before I finally decided that I was an idiot and I had to stop.

So whenever someone asks me about something and they ask, “Have you ever had the same problem?” the answer is a very strong “Yes.”  And I probably made the mistake many more times than you, and I probably made the mistake much worse than you.  But that’s — you know, I’m being honest.  So yes — at this point in my career, I am not surprised by anything, and every time I see the potential to do something stupid, you know, I think back “Yeah, I used to do that.”

So yeah, yeah.  To answer your question, yes, I’ve had any problem that you can possibly imagine.

“Insanity: doing the same thing over and over and expecting different results.”

Okay, question: Buying below a bar obviously means buying a great bear bar at point of entry.  Any idea how to overcome the fear to enter in such a moment?

To me, what I’d do is I’d just use a stop, and if I get stopped out, that’s how when I get stopped out.  I’m usually willing to scale in, and use a wide stop and that increases my probability, and you can see traders who were buying lows here below 45, below 50, below 55, below 61, right, they certainly were not happy by 70 close, 71 close, and they may have just exited there.  But some of them said, “Screw it.  We’ve had so much trading range price action today.  It’s unlikely the gap below 61 will stay open.  I’ll just buy more two points lower, and try to get out at the 60, 61 low”.  So as long as you understand what the market is trying to do, you have a much better chance of being able to do the right thing and not getting scared into doing the wrong thing.  In other words, you have a much better chance of making money than losing money.

Limit order trades not for beginners

However, when traders are starting out, I do not think they should be buying the 50 low, the 55 low, the 61 low, the 72 low.  But after you’ve traded a long time, you start to see stuff and it’s totally the opposite of what you think.  You know, you hear people saying, “Oh, you got to sell below 45; you got to sell below 50,” and to me, that’s dumb, right? If you’re going to be selling in a market that’s most likely converting into a trading range or a bear channel, it’s better to be selling above bars instead of below bars.  And it takes a long time to make that adjustment.  Everything’s counterintuitive.  You got to think about if I’m a beginner, where would I be getting in, where would I be getting out.

And if I’m a beginner, I’m losing money, and therefore the experts are doing the opposite of me and they’re making money.  So how can I get to the point psychologically of doing the exact opposite of what feels natural?  And it takes time to get to that point, but once you’ve lost often enough and lost enough money, you start to realize that what feels natural based upon experiences of everyday life is the exact wrong thing to do when you’re a trader.  And it doesn’t matter if you’re trading commodities, stocks, trading houses, trading cars, trading anything. It’s still the same process. And it is a rational behavior, and if you’re really good and objective, you can make a lot of money buying or selling anything.  You just have to understand human behavior and what is logical, and get away from what is emotional.  What is emotional is, “The market is falling, I better sell below lows.”  What is logical is, “Aah… I’ve seen a lot of trading range price action today.  I bet if it falls below lows, bears will take profits and bulls will buy for a scalp.”   And it takes a while to be able to look at it logically and figure out what is likely to happen.

All right, hope everybody has a good night.