Question: I sold just above the 29 high. I added two points higher and exited as 46 was forming. Can you comment on my trade? Many thanks.
Video duration: 3min 35sec

Scaling in – be alert to potential reversal 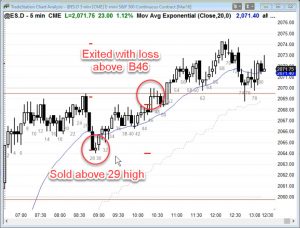 I also sold above the 29 high. I forgot how I did it. I think I sold the 29 high. Maybe I sold a tick or two above, and then I sold more one point higher, and then I got out at my first entry and I made one point. I was lucky. When we had the three bull bars, 31, I thought the bears were going to get was sideways for a few more bars.

Small range – one point scalp only

For me, let’s say I managed the trade differently. Let’s say I sold the 29 high and looked to sell more two points higher. First of all, I would not do that because the range is so small. I’m going for one point scalps, so scale in trades are also one point. If I’m disappointed from the 29, 30, 31, sometimes I just decide “Okay, that’s not what I was expecting. I’m just going to try to get out breakeven on the entire trades and not worry about making a profit on the first entry.”

Maybe I raise my limit order one tick, and then 33 hit my limit order, did not fill me. At that point, I’m getting out above the 33. It made a couple attempts to bail me out, and it did not. It’s probably going to go higher and I would look to sell again higher.

Had I sold the 29 high and added on? Ok? So you sell the 29 high, you add on two points higher. One, two. So he sold here, sold more here. It did not even come to the midpoint of the two entries. It tried to get there, 37, tried again 40, 41, did not get there. So the traders trying to get out breakeven on the entire trade again are trapped. It keeps trapping the bulls. These small pullbacks are trapping the bulls. If you did not get out above 33, you’ve got to get out above 41 or 42.

On wrong side – get out

The message I’m trying to give is: If you are in a trade and you think that it might be getting bad and you’re trying to get out with no loss, or minimal loss, and it just comes very close to letting you out but misses your order by a tick or two. And then keeps going against you, and it does that a second time, a third time, you’ve got to think “This is going up. I’m on the wrong side. I’ve got to get out.”

I hope that makes sense. If you see a trade that’s bad and you’re trying to get out breakeven and the market comes close to letting you out but does not let you out, you are trapped. And if you’re trapped, you’ve got to get out and you’ve got to take the loss.