Market Overview: NASDAQ 100 Emini Futures The Nasdaq Emini futures is in a strong bear leg. This is the 5th consecutive bear bar and successive weekly bear close below the prior March low. At the same time, bulls who bought the low of March made money selling near the monthly exponential moving average (EMA). The week started […] 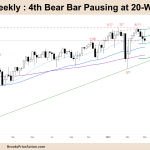 Market Overview: FTSE 100 Futures The FTSE futures market had a 4th bear bar pausing at the 20-week moving average (MA). We are moving down from a wedge reversal at the top of a trading range. Traders are deciding if we will get a measured move down to the March lows or get a second leg […] 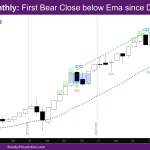 Market Overview: NASDAQ 100 Emini Futures This week’s Nasdaq Emini candlestick is a big bear bar closing near its low below the prior low of the year – the week of 3/14 -and below Exponential Moving Average (EMA). The first monthly bear close below EMA since December 2018 – the first time in more than ten years […] 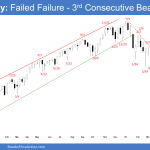 The S&P 500 Emini futures had a failed failure on the weekly chart. Odds slightly favor sideways to down early next week. It may even gap down on Monday. However, small gaps usually close early.

Bears want a test of the February low followed by a strong breakout and a measured move down. Bulls want next week to have a bull body, even though the Emini may trade lower first. 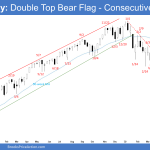 The S&P 500 Emini futures had a consecutive bear bar on the weekly chart. The bears are hoping to get the 3rd consecutive bear bar trading far below March 3 high. If they get that, the odds of a test of the February low increases. The bulls see this as a 50% pullback and want a 2nd leg sideways to up to re-test March 29 high. 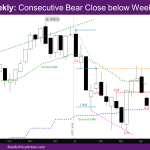 Market Overview: NASDAQ 100 Emini Futures Nasdaq consecutive bear close on its low and below weekly EMA. It is a good follow-through bar to last week’s big bear bar. The week gapped down and had strong selling pressure – 3 of the 4 trading days in the week had good bear bodies. The bulls had a […] 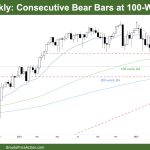 Market Overview: DAX 40 Futures DAX futures moved lower last week with a successful Low 1 at moving average last week, now with 2 consecutive bear bars with tails below. We are always in short. Bulls are looking to scale in for a double bottom at the March low for a long-term trend resumption up. […] 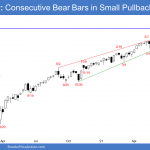 Weekend report co-author Andrew A. Market Overview: Weekend Market Analysis SP500 Emini consecutive bear bars testing several support levels ahead of the FOMC statement report on September 22, which can be a catalyst for a big move in either direction. September or October should be a bear bar on the monthly chart and the start […]